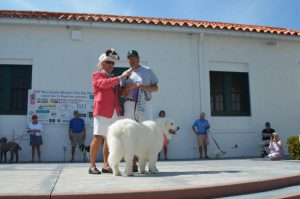 BY MARCY SHORTUSE – In the end, Jenkins was the man. You could see by the look in his eye it was plan all along to win the highly-sought “Boca Bowser” prize at the 2017 Boca Grande Woman’s Club Dog Show, and he delivered … all 125 pounds of him.

Jenkins is an 11-year-old Great Pyrenees owned by John Heldrich. He achieved the ultimate title at the show, and his owner seemed quite pleased. Maybe not as pleased as Jenkins, because that big fluffy white dog was in his glory.

“Every day around 4 p.m. if you go to the dog park you’ll see him perimetering the whole island, making sure everyone is safe,” Heldrich said.

Jenkins was also the top dog in the Working group of the show, and he was up against some stiff competition in both categories.

What do you think the key to old age is? That was the question Master of Ceremonies Hank Cox asked the owner of Gallie, a 17-year-old dog of undetermined origin who took the “Boca Geezer” award. Her owner, Harlan Stanley, wasn’t sure how to answer that question.

“I was wondering if the Geezer was me or the dog,” Stanley said.

The Puppy category was dominated by the lively and talented Gaspar, a fierce pirate Malti-poo who enchanted everyone in the audience and is owned by Drew Tucker. The Toy group was taken by Mojo, a chocolate Havanese owned by Barbara Wilson. The Terrier group was taken by Lily May, a soft-coated Wheaten terrier owned by Kate Imbrie.

In the Hound group a springer hound named Smudge took the top honor, leaving his owner John McIntosh very proud. The Non-sporting group winner was Charley, a standard poodle owned by Vicky Winterer, and the Herding group was taken by a prolific dog named Brother, owned by Pamela Buckles. It was also Brothers’ ninth birthday, and the crowd enthusiastically sang for him.

“Brother is actually named Grand Champion Grand Gables the Frat Boy, which is why we call him Brother,” Buckles said. “He has been named the number one sheltie in the United States for three years in a row, and the top sheltie of all time. He has 365 best of breed wins, 13 best in shows and 25 specialty best in show wins. He’s also the most loving, sweetest guy ever.”

Brother is also the “brother” of the famous Rumor, who took best of show at Westminster this year.

There were two Sporting groups, A and B. In the A group a Golden retriever named Banyan (owned by Scott Feringa) took first, while in the B group Zippie the English springer spaniel took first. He is owned by Raymond Pirtle Jr.

The Rescue group winner was Lola, a cocker spaniel mix owned by Andrea Nielsen. Lola is a purebred but was in a home where she wasn’t fed and very neglected. Andrea said while Lola has been very mistreated is a very anxious dog, she is a very sweet girl.

The best costume winner was Max, a Labrador retriever owned by Blanche Vedette. Vedette is the founder of Tank’s Legacy, a non-profit animal rescue, and she works at the Loose Caboose. She is also a foster for Labrador Retriever Rescue of Florida, but in Max’s case she was more a “foster failure” (meaning she eventually adopted him). Max is of an age older than 10, Blanche said, and has major leg surgery.

The competition was brisk in the Musical Chairs category, but in the end it was Toby Edwardson and his owner, Fran, who took the top place.

In all there were approximately 40 dogs in the show and it was a raving success, thanks to Dog Show Chairs Sally Allgyer and Ann White, Announcer Julian Keevil, Master of Ceremonies and Ringmaster Hank Cox and Musical Director Alex Newberry. Judges for the event were Ronnie Waud, a man with a PhD in Dog Eccentricities, and Angela Steffan, president of the Boca Grande Woman’s Club.

All proceeds from the Yappy Hour Cocktail Party the night before the event, all entry fees and all poster sales (there were almost 80 of them in all) were donated to Suncoast Humane Society.

Newer PostBe courteous and safe when on the Bike Path
Older PostThe story of Blair, a true Wonder Woman