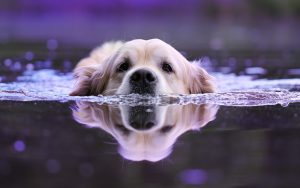 Last Friday my daughter and I were strolling along the beach with our two Labs when Cleo, my daughter’s Lab, went into the Gulf, started swimming straight out and did not stop. Before we could react she was too far out and moving too quickly. You can just imagine our panic as we watched her disappearing.

We called the public safety officers, but we were not optimistic that they would be able to mobilize in time. A half an hour went by, and Cleo was a speck on the horizon – hardly visible. There were people on the beach offering support to my daughter as she kept her vigil on that speck. The current was driving Cleo northward, but fortunately somewhat closer to the beach. I saw the rescue boat racing up the coast from the south, which gave me some hope. Then two men at The Gasparilla Inn Beach Club saw what was happening and sprang into action. They swam out and successfully corralled Cleo to shore.

My daughter was so overwhelmed to see her pup again that when she finally recovered, she did not see the two men who had rescued Cleo. The man in the rescue boat saw that Cleo was safe and turned around to head to the other side of the island.

We don’t know who these heroes were, but if you or any of your readers ever have the opportunity to identify them please let them know how their heroic actions saved my daughter and her family from a tragic ending to their vacation. We are all so grateful.

With a heart full of gratitude,