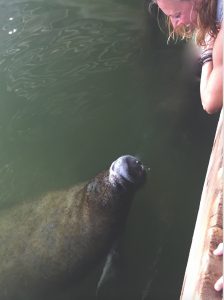 The temperature is getting balmier and the water is getting warmer, and the manatees know what they should be doing this time of year.

Mating season has started, and many manatees have recently been spotted around the Seventh Street boathouse and along the shallow waters in the bay. This is a mating ritual that is impossible to ignore.

Last season, residents Sue and Tom Shaffer spotted a dozen manatees just off Boca Grande beaches around the middle of May. So far this year, they have only observed them in the bayou.

Female manatees reach sexual maturity in 3 to 5 years, and males reach it at 5 to 7 years. Some may live more than 65 years in captivity.

The gestation period is approximately 13 months, and usually one calf is born. The calf may stay with its mother (cow) for up to two years.

Male manatees (bulls) are not part of the family unit. Bulls will leave a cow alone after her breeding period is over. Of the wild manatees that reach adulthood, only about half are expected to survive into their early 20s.

The Florida manatee, designated the state marine mammal in 1975, is among the state’s most popular native animals. A listed species under the federal Endangered Species Act and the state’s Imperiled Species List, the manatee is threatened by human-related impacts such as habitat loss and boat strikes, as well as natural events such as cold snaps and red tide.

Manatees inhabit rivers, bays, canals, estuaries and coastal areas, moving freely between fresh, saline and brackish waters. Florida estuaries and freshwater lakes, springs and rivers provide extensive beds of seagrass and abundant freshwater aquatic vegetation that serve as the manatee’s primary food sources. Just as important is warm water habitat. Manatees cannot tolerate prolonged exposure to very cold water (below 68 degrees), and in the winter they’ll migrate to areas of warm water for survival. To help sustain a healthy population of manatees in Florida, the Florida Fish and Wildlife Conservation Commission and other partners and stakeholders work together to manage the protection of Florida’s seagrass and warm water habitat resources.

FWC Officer Stuart Spoede said it is illegal to touch or interfere with manatees in the wild. “We usually have an officer stationed in Boca Grande, especially during tarpon season. And we try to get out and educate people as much as possible,” Spoede said.

While many times officers will give a written warning to tourists or people who are unaware they’re breaking the law, they will often issue a misdemeanor citation, meaning that the person must appear in court. A judge, depending upon the severity of the offense, will determine any fines.

Spoede said that while manatees can mate at any time, most are witnessed doing so from late winter through early spring in very shallow waters.

If you see any manatees in shallow water, FWC officials ask that you please give them space. If you notice a sick, injured or dead manatee, call the Florida Fish and Wildlife Conservation Commission’s toll-free number at (888) 404-3922. Be prepared to give the exact location where you spotted the animal.