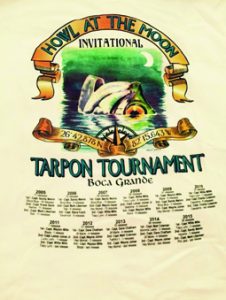 If you hear some howling in the Pass Friday night, pay no mind or join right in, because the 2016 Howl at the Moon Tarpon Tournament will be taking place from 8 to 11 p.m.

As of press time, just under 20 boats had signed up, and observers were being collected. If you are interested in getting on the observer list, call Melina at (941) 964-0907.

This tournament is in its 12th year and is fast becoming a tradtion. Last year, Capt. Willie Mills and his team took first place, with Capt. Sandy Melvin on the Haywire in second and Capt. Mark Liberman on the Phil-Jack in third with the last fish released. There were 39 releases in 2015, with an average release time of 4 minutes, 30 seconds.