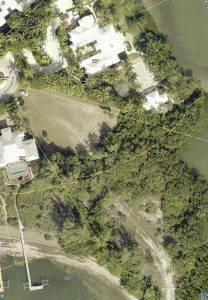 BY MARCY SHORTUSE AND SUE ERWIN – The Lee County Hearing Examiner’s office in Fort Myers became a rather heated place on Tuesday, Jan. 9 as the discussion regarding a road between Boca Grande Isles and Three Sisters Island and its proposed variances was continued from a preceding December meeting. The two sides of a very lively debate between local homeowner Chad Pike’s representatives and those of the Boca Grande Isles Homeowner’s Association and a company called 5F, LLC led the hearing examiner down a path that included some very personal attacks against both parties, including surveillance footage and cartoon drawings.

Beginning at 9 a.m., the first three hours of argument were presented by Pike’s attorneys to Deputy Hearing Examiner Laura B. Belflower, Esq., but much of the presentation revolved more around whether a road between the two land masses should be there at all instead of addressing how to protect the Isles community from a potential increased traffic and environmental impact.

Pike, who owns property in Boca Grande Isles just to the north of where the road runs through and who also owns the only lot on Three Sisters Island where a dwelling is built, does not want the road to be allowed at all as an access point for vehicle traffic on Three Sisters. His attorneys argued that point all morning on Tuesday, rarely acknowledging the three variances that were supposed to be the focal point of the meeting that included relief from the 50-foot wide vegetative buffer zone around the road, relief from having to build a wall or berm between the road and the nearest residence and relief from the requirement regarding a five-foot minimum retaining wall setback from the mean high water line.

The attorney representing Three Sisters Island Homeowner’s Association, Inc., Michael Haymans, was able to present his client’s view of the matter after lunch. His discourse also included a fair amount of personal attacks on Pike and his cross-examination of some of Pike’s representatives was brutal, but his words appeared to be taking more to heart by Belflower as his comments pertained more to the subject at hand – the variances.

“The hearing examiner is required by county code to focus on particulars of the details of the requested relief from Lee County dimensional regulations,” Haymans said. “She’s not going to be ruling on whether the road is appropriate or inappropriate. That’s for another forum, there’s litigation going on about that right now. Lee County, though, has made it clear they don’t want to be involved in that litigation.”

Some of the allegations and extraneous information provided to the hearing examiner included a binder of drawings and comments made by various people regarding Pike’s character and lifestyle, but those documents were not available on Lee County’s web site at press time, nor were they disclosed in the hearing examiner’s office that day.

It was also alleged that Pike has sent out literature some time ago worldwide touting the promise of some sort of luxury facility being built on Three Sisters in the future, and that he was in possible violation of the homeowner’s association regulations for Boca Grande Isles in the fact he was advertising his home on Jack Point Lane as a “luxury resort” destination as well.

Attorney’s representing the Three Sisters Island Homeowner’s Association also alleged that Pike was attempting to drive property values on Three Sisters down with no vehicle access, so he could one day buy the other lots and create another type of luxury facility there. They also speculated that Pike purchased the boathouse at the end of 7th Street out from under 5F LLC, the corporation that owns 10 of the 14 lots on Three Sisters, so they would not have immediate access to a land base close to Three Sisters if road access was denied.

Haymans said if the homeowner’s association prevails in this matter they would eventually turn their smaller lots into six larger lots, which would mean only six single-family residences would be built on the island instead of a possible 14.

“The vehicle traffic from those six lots is still below what the Isles was approved for,” he said. “There’s no additional impact from this roadway. It might actually take some of the environmental impacts away if you consider the amount of traffic you would find coming to the island by boat. There are some very positive things that could come from this.”

Two residents of the Isles spoke out at the hearing against the possibility of road access, and the point was brought up that while many Boca Grande Isles residents were not in favor of the roadway until the homeowner’s association purchased the bottom lands, allowing many of them to build docks on waterfront land where they could not before, and allowing access under the Boca Grande Isles main bridge so that repairs and renovations could be completed. They alluded to the fact that some property owners feel as though their hand might have been forced when those bottom rights were purchased, as was the land under the bridge.

While many have argued there was never supposed to be road access to Three Sisters, Haymans produced documents showing Lot 99 as a utility easement and an ingress-egress, with the utilities running right down the middle of the property. This was indicative of the fact a home could not be built on that lot anyway.

Boca Grande Isles homeowner Ronald Strich also spoke at the meeting representing 5F, LLC, and his presentation also included personal attacks against Pike which the hearing examiner sternly chided him for. Strich owns lot 99 in the Isles. When Belflower advised Strich to tone down his rhetoric as his attacks were becoming far too personal, he appeared to skip ahead through several sections of his presentation, decreasing its length exponentially.

Belflower listened to all sides of the discussion and interjected several times with attempts to find out how to grant the variances, throwing around several suggestions that were not greeted with any real enthusiasm. In the end she said she would have to review all of the information presented to her in much greater detail so no decision was made. It could take up to a month or more before her decision is announced.

Newer PostWant to help our feral cats? Give R.P . a call
Older PostChowder soothes the soul … stop by and help TIS, too!