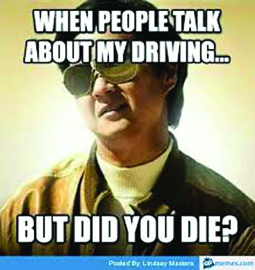 If you just arrived on the island around Christmas, you might have noticed it was a little busy on the roads. By Valentine’s Day this will become a regular occurrence, so you might want to do some rosary work and wear your plate mail to go to Hudson’s to pick up your roasted chicken.

It occurred to me the other day, as a large pickup truck smashed into the side of my car (not here, but off-island), that people who have been driving for years might need a little refresher course on the basic faux pas even experienced drivers make when driving here on the island.

My father was more than a little bit of a stickler when it came to rules of the road. I learned to drive when I was about eight in a 3-speed-on-the-column Studebaker truck on Illinois farm roads.

But that first day I took my grandfather’s car to school after getting my license, something happened. I still don’t know what it was. I remember stopping at a four-way stop, waving at another friend who was on his way to school, hitting the accelerator and spinning out of control. I smashed into the driver’s door of a 1982 Trans Am that was parked in the street there, and I totaled my grandfather’s car.

Because most of my car was in the roadway, I immediately tried to move the car out of the way. I was a little frazzled from the impact and didn’t realize that the car was still engaged in drive. As I tried in vain to start the car, good ol’ Rochelle PD Officer Roger Joe Johanning pulled up on the scene, dragged me out of the car and threw me on the hood. He apparently thought I was trying to leave the scene.

What made it even better was that once the police reports were filed and all was said and done, I continued on my way to school as best I could and went to class. Sometime around first period, my mother came to the school and dragged me out to face my fate.

Here are a few of the driving mistakes that are commonly made around these parts:

1) People seem unsure about the new law regarding left-lane traffic. If you’re driving on 771 or Placida Road, you can drive in the left lane – but if you’re being overtaken by another vehicle going faster than you are, you need to get over. I don’t care if you’re already going five miles over the speed limit, don’t be smug. You have to get out of that lane and allow that car to pass. Use logic, not your emotions.

2) You know that intersection at the Boca Grande Causeway entrance and Placida Road? If you’re coming from Port Charlotte, you’ll turn left to get on the island, and there is a stoplight dictating when you can go. Even if the green arrow light isn’t on, if the light is green and no cars are coming across the intersection toward you, you can turn left at will. Cars coming from Englewood headed south on Placida Road will pull into a little righthand turn lane with a yield sign. That means they DO NOT have the right-of-way if cars are turning left (west) onto the Causeway into their path. Those cars in the right turn lane have to yield to oncoming traffic.

3) Mirror positioning is very important. Where most people fail miserably with their mirror positioning is with their side mirrors. Ask anyone what they see when they look in their side mirrors and they’ll most likely say a bit of the back of their car, possibly the rear passenger door handle at the least, and the road. You don’t actually need to see your own car in your side mirrors. Angle them out just a smidgen more so you don’t see your car at all, and you’ll eliminate a blind spot. Remember, if a small child or animal is behind your car and below your line of vision in the rearview mirror and back window, you will not see them. Always be aware of your surroundings prior to putting the car in reverse.

4) One big problem we have here is that roadside bushes may partly obstruct your line of sight when you are at a stop sign. You must not get into the habit of pulling up past that white line so you can see. You must first come to a full stop behind the demarcation line. This is particularly important when pulling out of Wheeler Road and the other streets off Gulf Boulevard that intersect with the golf cart path. Whether it is their job to yield or not, golf cart drivers notoriously do not yield. They are also in an open vehicle that weighs approximately 500 pounds. You are in a closed vehicle that weighs approximately 2,500 pounds. Make sure you stop your car where you are supposed to, and you’ll be fine.

5) Now, let’s talk about bicycles. You may not like them, but they are here to stay, and they provide a mode of transportation that is needed here on the island. That being said, riding a bicycle doesn’t give you a license to be a jerk. In Florida the bicycle is legally defined as a vehicle, and the bicyclist is a driver. Bicyclists have the same rights to the roadways and must obey the same traffic laws as the drivers of other vehicles. These laws include stopping for stop signs and red lights, riding with the flow of traffic, using lights at night, yielding the right-of-way when entering a roadway and yielding to pedestrians in crosswalks. Watching entire families ride their bikes through intersections without stopping or on the sidewalk in front of stores is becoming more and more common. Please don’t teach your children your bad habits. Teach them how to be safe.

6) A thought about parking in front of Hudson’s Grocery. I know it’s a crazy place and I know the front of your car will fit into that little spot a golf cart just pulled out of. Please take into account that the rest of your Cadillac Escalade is HANGING OUT IN THE MIDDLE OF THE ROAD, for God and everybody else to maneuver around. There is no diagonal parking in front of Hudson’s unless you are in a golf cart. None. Nada. Zilch. I watch the lunch frenzy every day from my window and what I find to truly be a study in human behavior is to watch somebody improperly park their car diagonally, then watch three other vehicles do the same thing within five minutes. Just because everybody’s doing it doesn’t make it right. Didn’t somebody’s mom say that?

7) This one is important. DO NOT leave small children unattended in your golf cart when you leave the vehicle. Even if you’re standing right next to it, it can still be easily engaged if the key is in the ignition. We have had this happen. In that particular circumstance, not only did a child almost run over a relative standing in front of the cart, but another child fell off the cart and rolled under it.

It’s easy to be distracted and let your guard down. Just think and be safe.

Marcy Shortuse is the editor of the Boca Beacon