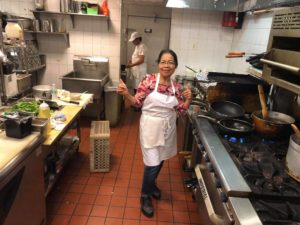 BY MARCY SHORTUSE – Though she be but little, she is fierce.

The words may have come from Shakespeare, but they describe Jam “Noy” Vollmer exactly. Once you met her, you never forgot her. Once she entered a room, you forgot what it was like before she was there.

Noy left this earth on Thursday, Jan. 14, 2021, and her passing left a void that could not, and will not, be filled. Her radiant smile, her eyes that were filled with laughter in one moment and an all-business intensity the next, her diminutive frame, her never-ending love for her family and friends … they were all Noy trademarks.

She loved everyone in Boca Grande and made more friends in her time there than many people could make in a lifetime. It wasn’t just because her cooking was beyond amazing – which it was – but because she could not be anything but genuine, and people could sense it.

Noy was known for working at the Tiki Bar that used to be on Park Avenue next to the Pink Pony (where they served Thai food and pizza), at the bakery with her son, Patrick, and of course at Patrick’s Thai Bistro and Sushi Bar on the north end of the island, in the Boca Grande Resort. The clientele that came to eat there almost always returned, including some celebrities such as Former First Lady Laura Bush. Noy’s son Patrick remembered the first time she ever came in. 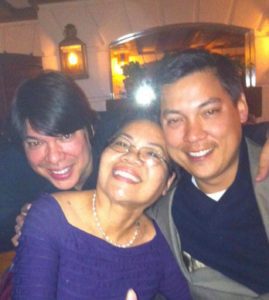 “I told Mom to stay in the kitchen until she (Mrs. Bush) was done eating,” he said. “The next thing I knew she had her camera out and was trying to take pictures of her, telling her she was a Republican her whole life. She couldn’t make the camera work, though, and she was frantically trying to take a picture. I told the First Lady I was sorry and Laura said, ‘Don’t ever apologize for your mother!’”

Noy also worked for Boca Grande’s Moffat family at the Blue Mingo Grill in Cooperstown, N.Y. What started out as a part-time job just two or three days a week turned into a full week, because Noy had no idea how to work part-time. For her it was all, or nothing, and she went full bore in the kitchen, creating some of the most delicious food ever eaten, until she became sick in October of 2020. Noy also worked at the restaurant that was her namesake, Noy’s Bistro and Lounge in Rotonda, with her family and close friends whom may as well have been her family.

Throughout her culinary career she cooked for presidents, supreme court justices (she cooked a basil garlic shrimp dish for the Honorable Ruth Bader Ginsburg), Neil Armstrong, the First Lady, actors, baseball hall of famers, singers, CEOs and, of course, many Boca Granders.

She touched a lot of people.

There were many unique things about Noy. She loved to fish and catch crabs and was on the Chatham boat in a tournament when she caught a Goliath grouper, which made her scream with delight. When she lived with her son Patrick above the island’s bakery, she was afraid of the ghosts there and insisted on going to the Pink Elephant to have a pina colada … which soon turned into more … and then, after three or four additional glasses of wine, she was laughing and dancing, ready to face the ghosts when she returned to the apartment. She loved staying there with Patrick and his dog, Yum Yums. The woman who swore she would never care for an inside dog and would certainly never let one sleep on her bed, at some point changed her mind. She enjoyed taking Yum Yums on walks to the beach, and he would always lead her back home.

She was also very industrious, could change a tire, drink like a sailor and was thought of as a rockstar.

Noy was also very blunt; she did not mince words. She always told you how it was and could fight as well as she would love. Her children remember her as a harsh disciplinarian and loved her even more for it. She was a tiny woman with big sons, but she made sure they were taught how to behave properly, sometimes with a little help from a bamboo broom. She taught her children everything, including cooking and making people laugh. Her children want to continue to share her gifts with the world, and so far, they have wildly succeeded.

Family was everything to Noy, and she had a house built for her mom (who is still alive) in Thailand. She and many family members would go to visit her for a month at a time, when the restaurant was closed in off season. Her father, Hang Charmart, passed away in the early 1990s, after complications from a cobra bite.

Noy was very proud when Patrick’s opened on the north end, and even more proud that she shared that success with family members Patrick, Jason and Margarita Michaels (not a blood relative, but family all the same).

Noy met her first husband, Mike, while she was working on the NKP Air Force Base in her hometown of Nakhon Phanom, Thailand. They were married in Thailand, and she joined him in the States when he was discharged from Vietnam. They lived in Syracuse, N.Y. while raising their three children – Jadon (Jason), Patrick and Alonya – but in 1979 after a vacation to Southwest Florida they decided they were through with the snow and the cold, and moved to Florida in 1980 to Riverdale, near Alva. Noy worked for the Lee County School District for 25 years, but never missed making a meal for her family. A sit-down dinner was always available at 5 p.m.

When Mike and Noy divorced in 1991 she was working two jobs to support her children, which is how she met Thong Thepvongsa. It was in 1992, and she was working in a restaurant where he was a patron. He couldn’t stop staring at her, and eventually he introduced himself. After a 10-year “trial period,” they were married and were together until her death. They were very much in love.

In October of 2020 Noy was debilitated by an allergic reaction to an antibiotic and was hospitalized on and off until the day she passed away. The life of the party was gone, and with her she took her beautiful, unforgettable smile and her incredible spirit.

Being part Buddhist, part Christian, it is difficult to say where Noy’s energy has gone. If it went to heaven, you can be guaranteed the first thing she did was head to the kitchen to check it out … then most likely nudged God (or whichever saint was cooking that day) on their hip and said, “This is my kitchen now.” And they were most likely glad to give it over.

If, however, her energy took the Buddhist path, you can find her in every flower, hear her in every laugh, smell her in every savory Thai dish that is cooked, and feel her love in every sea breeze. If there was ever a spirit that deserved to achieve Nirvana, though, it is Noy.