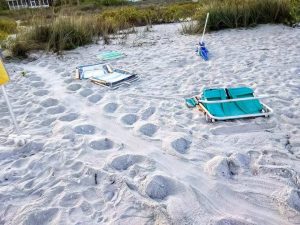 STAFF REPORT – While no nests have been reported on Gasparilla Island as of press time, the season is sure to start soon as a first false crawl was found by Boca Grande Sea Turtle Association patrollers on Wednesday, April 22.

Meanwhile, at the request of the Florida Fish and Wildlife Conservation Commission patrollers have been monitoring 3rd Street to 35th Street and from the Range Light south to the Lighthouse state park since April 15. This is because of the renourishment project last year, and the fact those are control areas. They will begin to monitor the rest of the island’s beaches on May 1, the official start of turtle season. 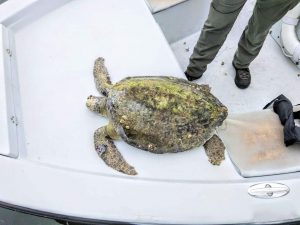 That, of course, also depends on whether the “Safer at Home” Order is lifted prior to (or on) that day.

According to patrollers, problems with beach furniture and holes dug in the sand are already beginning. It is vital to nesting turtle health and safety that all beach furniture, toys, umbrellas, etc. are picked up when people leave the beach. Sea turtles cannot back up, and once they are stuck in a piece of furniture (or a baby or adult sea turtle is stuck in a hole), their demise is almost certain.

• Remove all equipment, beach furniture and other potential obstructions from the beach at night, when nesting females and hatchlings need to move unimpeded across the sand.

• Manage artificial light at night by turning off lights when not in use, closing curtains and shades, and shielding lights needed for human safety so no light is visible from the beach. Baby sea turtles are drawn to the artificial light, instead of the light reflected on the water which leads them to where they need to be.

The sea turtle patrol also reported that on April 5 an FWC Officer spotted a struggling green sea turtle suffering from fibropapillomatosis, a debilitating disease caused by the herpes virus. Turtles with FP have external tumors that may grow so large and hang down and hamper swimming, vision, feeding, and escape from predators. This turtles mossy carapace showed she has been moving slowly and sick for a while. The officer transported the turtle to Boca Grande Marina where BGSTA permit holder Donna Archibald Larson and her husband, Gary, met the officer and transported the turtle to Mote Marine Laboratory & Aquarium, where she will be rehabilitated. They named her Hope.

Newer PostIsland survey shows strong support for the Gasparilla Act Part I: Clearing up some misunderstanding
Older PostAll it takes is one person to make a difference: The 2020 Giving Challenge and BIPS