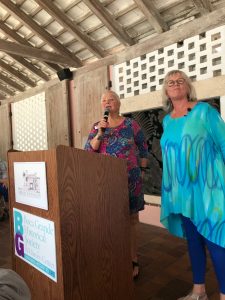 BY MARCY SHORTUSE – The most recent History Byte of the 2020 season was more about a community and less about a place where books are kept. The Johann Fust Community Library and its 70-year celebration was celebrated at this talk, held on Wednesday, Feb. 19 and given by Johann Fust Foundation Director Bobbie Marquis.

As with many small communities, the Fust Library was never just a place to borrow books and do research, and that was made very clear by Betsy Fugate Joiner and Trisha Lowe, two generational island residents who joined in the conversation on Wednesday.

“This library has been used as a gathering place, as well as a place for weddings, receptions and more,” Betsy said. “We thank you all for giving us such a wonderful little library.”

Marquis began her tale of the Fust Library’s beginnings by cautioning the audience that it was more of a love story than anything else.

“Many of you might know as much about this library as I do,” she said. “But I don’t know if you understand that the story of the Johann Fust Community Library is a love story. A love of learning, and of community, and it begins with the story of Roger and Louise Amory.”

Roger Amory was born in Boston in 1887, and was a Harvard graduate. He later became a banker and financial advisor for many companies and individuals. In 1939 he married Louise, but not before a rather interesting series of events brought them together.

Louise was first married to Roger’s brother, John, and they had four children. In 1936 John was diagnosed with tuberculosis, and he died three years later. Louise was also unwell, and Roger took her in when John died. Eventually, they married.

At the urging of a good friend of theirs named Louise du Pont Crowninshield, the couple visited Boca Grande and fell in love with the island. They eventually came to stay on the island as well, but soon realized there was one thing missing – a good library. Louise missed her lending library in Boston, and Roger missed his vast and private collection of rare books.

In 1948 Amory conceived a plan to create a small library on the island. His vision was not just for a library, as much as it was for a leisure center and gathering place for the community.

In January of 1949 the Amory’s and their builders had their first meeting. They hired Harry Shipley, who was part of the firm Coolidge, Bullfinch and Shipley. They designed several of the buildings on Harvard’s campus, and were very well known for their time.

The Amory’s also hired a local construction firm, Griffin Builders, to bring their dream to fruition. In 1949 the work began, and the library opened on January 1, 1950.

When the Fust Library opened in 1950, Roger served as the librarian Louise was the assistant librarian. In 1963, Pansy Cost became the librarian and her husband, Tommy, became the caretaker of the grounds. They lived in the little house next to the library, which is also going to go through some renovations soon.

The community loved Tommy and Pansy, and they were part of most of the important social functions of the day. Pansy was a Sunday school teacher and choir director, and Mary Vickers Knight, one of the librarians at Fust who grew up on the island, remembered how much she meant to the children.

“One of my earliest memories was of this library, and someone giving me a library card on my birthday,” Mary told Bobbi one day. “I grew up about four blocks from here, and I remember what a safe place this was for the island kids. One of the most interesting aspects of working here is getting to know the people who come here. They thank us for being here, I thank them for coming. They are the reason we are here.”

Through those early years, Bobbie said, the library was cultivated and nurtured to become the beloved institution we know today. One of the most popular offerings were the recordings of the Metropolitan Opera that Roger procured. Music could be heard floating through the air on Saturday afternoons, and ladies would bring their needlework or their reading.

Marquis said Amory named the library after Johann Fust, the financier of the Gutenberg moveable press. Roger felt his importance was not acknowledged enough, and wanted to bring attention to the person responsible for such a pivotal invention to be introduced into our society.

The couple eventually decided a mobile lending library was necessary to bring books to other barrier islands, but a car or truck wasn’t good enough. The boat Papyrus and, later, Papyrus II were introduced into the community, and ran the coast for many years.

Bobbie verbally walked the audience through a tour of each room in the library, including the entrance that is made of keystone coral, and the Japanese hand-carved wooden panels on the foyer wall are from Roger Amory’s collection.

Betsy and Trisha ended the talk with some memories of their own.

“Pansy was a dream,” Betsy said. “She was a very strong woman, a strong Christian. I remember coming over the railroad tracks to the library, where the air was cool in the stacks. Most of us girls – not many boys – would come here, and Pansy would let us go in and play our games. She was always around, always a big part of our lives. She and our mother instilled in us a love of books, and this beautiful library.”

The next History Bytes lecture will be on Wednesday, Feb. 26 at 11 a.m. at the Fust Library. Chuck and Pat Agles will tell the story of how the Boca Grande Historical Society came to be, and others will add their memories as well.

For information call 964-1600 or go to bocagrandehistoricalsociety.com.

Newer PostChowder and auction treasures, anyone? Come to Chowder, everyone!
Older PostCoffee with a Scientist: Why red tide still means less snook