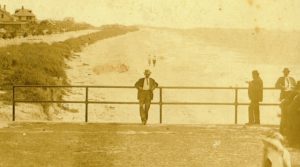 The second of four plats of the town of Boca Grande was recorded by the newly formed Boca Grande Land Company in 1908. The area platted corresponds almost exactly to the current Historic District between First and 19th Street. Most of the north-south running streets are recognizable and bear the same name as the streets we know today.

Of grim interest to current beachfront owners is the fact that the plat shows a very wide street called Gulf Boulevard between the beachfront lots and the Gulf between First and 19th streets. The paved portion of Gulf Boulevard had been destroyed by beach erosion by 1925 (Source: A Title Examiner’s History of Boca Grande by Michael Ingram).

The original 1897 Gilchrist plat shows the “Town of Boca Grande on Gasparilla Island, Lee County, Fla.” It shows the six-block area of what is today First to Third Streets and Gilchrist Avenue to Palm Avenue (Source: Images of America: Boca Grande, page 53).

A private citizen had put in some semicircular rows of palmetto logs, which acted to build up a little beach. Previous storms had destroyed Gulf Boulevard, a wide street between the blocks and the bank, the trees on both sides of it and in places several feet of the fronts of some of the lots themselves (Source: Boca Grande: A Series of Historical Essays, pg. 129).