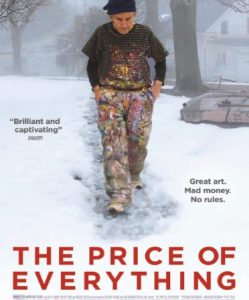 On Tuesday, November 12 at 4 p.m., the Johann Fust Library Foundation will show the documentary, “The Price of Everything” at the Community Center auditorium. Then on Wednesday, November 13 at 3 p.m., there will be a conversation about the film in the Library loggia. This two-part event is offered to the public at no charge.