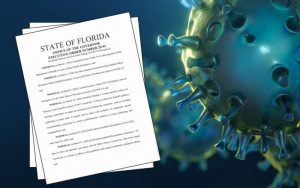 BY MARCY SHORTUSE – As the Florida Department of Health and private labs are able to provide more and more tests for Florida residents, numbers of confirmed COVID-19 cases are exploding. As of 6 p.m. on Wednesday, April 1, there were 7,773 cases confirmed, with one of the highest 24-hour jumps reported – 819 new cases in one day.

That might give you a vague idea of how many cases are still out there; people who haven’t – and may never – be tested. You see, the key is not to look at the numbers the state presents us regarding people who were tested, but to look beyond that at the exponential amount of people who will have the virus and recover (and never be counted in the numbers) … and those who die, and aren’t counted in the numbers. And, quite possibly, those who already have had the virus, or have already died, before we ever knew the virus was in our state.

With the new Executive Order that went into affect at 12:01 a.m. on April 3, many people have questions. Can you go outside? How will law enforcement know if you are not performing “essential activities” or if you’re on the way to an “essential job?”

Sheriff Carmine Marceno of the Lee County Sheriff’s Office said he is impressed by how many in the county have already begun following the basic rules that are set in the governor’s order.

“Because voluntary compliance has been so successful, our deputies will continue to use education and explanation as their primary tools when encountering non-compliance,” Marceno said. “However, for those who refuse to comply, we will issue a Notices to Appear – and –  if necessary, make physically arrests.”

Sheriff Bill Prummell of the Charlotte County Sheriff’s Office advised on Wednesday that this is a “very fluid situation,” and that not everyone on the street will be arrested.

“We will continue to educate the community as the situation evolves and please remember that the last thing we want to do is take legal action,” he said. We are not going to arrest anyone and everyone who is out in the community. Any disregard for this Executive Order may result in a misdemeanor charge under Florida State Statute 252.20.”

Questions about whether testing will soon be more available to more people are also being asked. While the Lee County Health Department is very busy right now, we had time to ask Public Information Officer Tammy Yzaguirre a few questions that many people are asking right now.

The Florida Department of Health in Lee County tests high-risk individuals, such as those who are symptomatic and have a history of travel from areas of widespread community transmission. They also test symptomatic individuals who are in contact with COVID-19 positive individuals and symptomatic healthcare workers.

So what do we do if we see someone out and about, who we know should be quarantined? Or if we see people acting in a way that isn’t conducive to “social distancing?”

“Individuals who have arrived from areas with widespread community transmission are bound by Executive Orders 20-80 and 20-86,” Yzaguirre said. “If these individuals are witnessed in non-compliance of this order, law enforcement is called to intervene.

Brian Gleason, communications manager for Charlotte County, said his county is broadcasting a strong, repeated message about social distancing and hygiene. However, for a time it seemed as though Charlotte County boaters weren’t listening very well. Up until this weekend they were stacked on sandbars and private beaches as they always had been.

While Gleason didn’t want to speak for marine patrol, he did say he knew of some examples of “unfortunate behavior” on sand bars in the Intracoastal Waterway and other locations.

“We strongly encourage people not to gather in large groups, as the CDC has warned against from the beginning of the outbreak,” he said. “Overall, residents are taking the CDC guidance very seriously. Traffic is down substantially, indicating people are staying home. But we can always do better.”

Newer PostThe loss of Nina Houghton resonates with many islanders
Older PostA message from the Clinic: A tale of two viruses