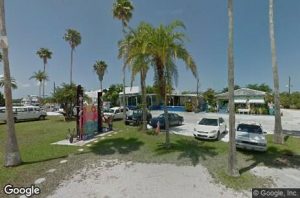 BY MARCY SHORTUSE – It may sound too good to be true, but it is: The Fishery property has been sold once again, and this time to a Boca Grande family.

Cookie Potter-Feinberg and her husband, Jay Feinberg, closed on the deal just days ago under the corporation name Placida Point, LLC, after purchasing the 18-acre property from Caribbean Bay Mortgage Lender, LLC.

“Cookie felt the property was in the wrong hands, and she was afraid that a bad plan would eventually go through,” said Jay Feinberg. “She bought it all and she will start fresh.”

Feinberg said they have been talking to Boca Grande and Cape Haze residents, soliciting input as to what they would like to see there.

“We’re still in the early planning stages, but basically we’re talking about a boutique hotel designed for weddings with a big lawn, a bridge club or bridge center, a restaurant and some retail space.”

There is talk, too, of the possibility of creating a small senior housing component on the land. The name for the property is tentatively going to be called The Village and Marina at Boca Grande.

Feinberg said the plans are still in the initial stages right now, but he knows their goal is to create a small-scale village atmosphere … and that does not include six-story buildings.

“We’re trying to keep it in the old Florida style, and to the right scale,” he said. “There won’t be any buildings taller than three stories, so no height variances will be needed.”

Feinberg said one of the reasons the purchase of the property spurred their interest was because there is such a lack of hotel space for people coming to the area for large events such as weddings.

Feinberg said they’re looking into not just the boutique hotel, but also some small bungalows as well, such as what The Gasparilla Inn & Club has.

Feinberg said while they like the atmosphere The Fishery property has now, they soon realized the buildings that are currently standing on the land are in a serious state of disrepair and won’t be able to be salvaged.

“We will only do a quality project, we’re committed to it,” he said.