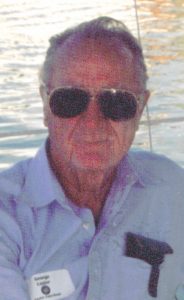 STAFF REPORT- George Luzier is a man who changed the face of Boca Grande Pass. Many who have fished or boated in Boca Grande waters have marveled at the old inboard tarpon boats with clean, majestic lines, and some of them were built by George Luzier. He also built boats in a coordinated effort with late Boca Grande resident and highly-acclaimed architect Tim Seibert. George was much loved in our community.

The term “lining off” is the process with which you project the final plank layout when constructing a wooden boat. And so, it is with the final days of a legendary boat builder. George Luzier, boatbuilder of Sarasota, Florida was such a man.

Boats were in his blood. By the age of 12 he had built his first boat and by 16 he had built four more. Two years later, in 1942, he joined the U.S. Merchant Marine and spent the next eight years circling the globe on a variety of ships. It was on these voyages that he learned the value of boats built to take to the seas. An appreciation of strength and simplicity over gloss and polish.

Returning to Sarasota in 1950 he started his own business, designing and building boats in an abandoned airplane hangar at the airport. Orders started coming in and his brother Homer joined him, building boats from 8 feet to 27 feet. It was a family affair in support of the family, wife Carolyn and his growing daughters Mazie and Madeline.

By 1966 they had outgrown their rented space so George bought a lot on Princeton Street and built a steel building with an adjacent yard for storage. Over the next 50 years George and his workforce designed and built hundreds of boats, both power and sail up to 50 feet in length, all sharing the essential design elements of simplicity and strength that became his trademark. During that time Sarasota had become a fine city of arts and culture and George’s shop was right in the shadows of gleaming skyscrapers. He never made the change from wood to fiberglass that now dominates boatbuilding. “I’d never build a boat from stuff that smelled that bad,” said George. 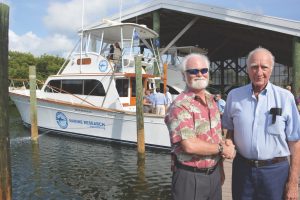 Through his strong sense of seamanship that was reflected in every vessel he built, he developed a market of customers who became much more than that. George was the central focus of a growing group of people who appreciated his values and it became almost a club. It was a rare Friday noon that didn’t see cars and trucks lining Princeton Street with a “bring your own bag” crowd for Friday Lunch with George. Ragtag furniture packed in his office with George holding court behind his beat-up desk, surrounded by four walls of fading photos of so many of his boats.

Old age didn’t make much headway with him until very late in life. After losing Carolyn, for a number of years he would be at the shop, sketching, sawing and sanding on his fleet of boats that returned to the shop for George’s touch. Even after he couldn’t be there every day, many friends would stop by the house for another dose of his humor and stories. He can’t be replaced, only remembered.

George bequeathed his entire collection of plans, tools, and drafting equipment to the Gulf Coast Maritime Museum, a new 501c3 tax exempt organization, formed to collect, preserve, and exhibit the history of boat building on the Gulf Coast of Florida.

In lieu of sending flowers, donations can be made to the museum building fund in George’s name, in the following two ways. Go to the museum web site at gulfcoastmaritime.org and use the donate key, or send a check payable to Gulf Coast Maritime Museum, Attn, Gary Alderman, 5225 13th St West, Palmetto, Fl 34221. All donors will have their name placed on a Memorial Plaque in George’s honor.