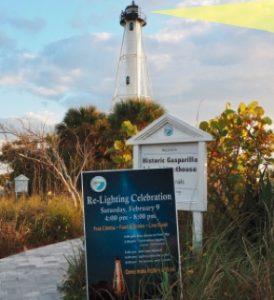 The ceremony was a “thank you” to the “miracle workers” who restored this island icon, and a tribute to the 650+ donors whose extravagant generosity made all this happen.

Built in 1881 in Delaware, the Light was moved to Gasparilla Island in 1927 and first lit in 1932. Over the decades, the elements and reduced government funding for maintenance resulted in rapid deterioration of the structure and the 7-plus acres of beachfront property it stands on.

But now, where there was once a rusting, decaying, neglected eyesore, stands a proud Lady, completely restored to her 1927 splendor. The effort culminated two decades of perseverance by BIPS leadership to have the land and structure conveyed to local governance from the federal government and U.S. Coast Guard. The effort was funded by big-hearted individuals, families, foundations and local businesses, all mentioned on a large bronze plaque that will be on the site of the Light.

Another important fact is that during the restoration process, the lighthouse was decommissioned and BIPS applied for the license to operate the Light as a Private-Aid-to-Navigation and will appear on all navigation charts as such.

The last point of interest is that during the downtime, BIPS commissioned the building of an exact replica of the fourth-order Fresnel lens, originally operating in the Light Tower at a cost of $49,000.00. The historic light/lens was switched on at sunset on February 9, 2019 and will flash every six seconds from dusk to dawn.

BIPS was also given the Florida Trust Award for outstanding achievement in the restoration for this effort.

Now, part of the land that was conveyed to BIPS by license is 7+/- acres immediately south of the Light, and BIPS will be eliminating all invasive species from this property to develop a walking park that will be ADA-compliant and also a butterfly park. This effort and the maintenance of the Light will cost about $50,000 per year to maintain.

In our original fundraising effort, we raised $1,602,000 from the 650+ donors, and those monies were used for the restoration of the Light and the start of eliminating the invasive species in the park. All bills are paid.

I am ASKING you to be part of a $250,000 fundraising effort for the purpose of an initial funding of an endowment to operate the Light for the next years.

We are a 501(c)3 organization, and contributions to Barrier Island Parks Society, Inc. are tax-deductible to the extent provided by law and within IRS guidelines. IRS Exempt Status # 65-0327-405. Checks should be made payable to the “Light Keeper’s Fund” and may be sent directly to BIPS at P.O. Box 654, Boca Grande, FL 33921. Contributions to BIPS are not comingled with those monies in the “Light Keeper’s Fund.”

Thank you very much for your consideration to put this island icon fund- raising effort over the top and develop a first-class park and continue to maintain the LIght for all to enjoy for years to come.