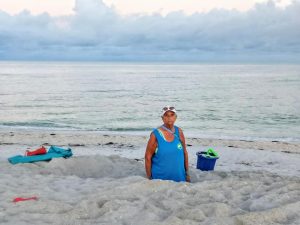 BY MARCY SHORTUSE- Just recently, a group of volunteers spent part of their day on the beach at 22nd Street filling in a large hole that had been dug. It measured approximately 15 feet across and was deep enough to create a very dangerous situation for people, and for sea turtles, which might have fallen in.

Jane Caple and Jim Cochrun, nearby residents, took their own equipment down and helped the Boca Grande Sea Turtle Association fill 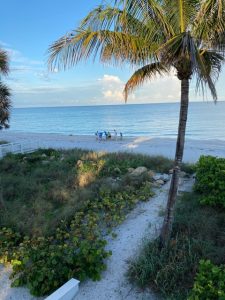 in the hole. Unfortunately, it was not the first time they’ve had to do it.

Many people don’t realize the dangers that large holes left in the sand pose to sea turtles as well as humans. Sea turtles are clumsy and ungainly on land, which is why they only leave the water to make their nest. They do not have the capability to back up, nor the strength to climb out of holes without help. If they fall into one head first, they quite often die. Baby sea turtles headed to the water have the same issue, and once they fall in a hole and can’t get out, they are easy prey for birds and animals that find them to be a delicacy.

Representatives from the fire department and sheriff’s department have admitted that they have almost fallen into some of these larger holes on their beach patrol vehicles, which could have led to injury — particularly when the holes are as large as the one found at 22nd Street.

Just recently another hole had to be filled in at 15th Street, a hole that came almost up to a sea turtle patroller’s waist. While many of the culprits could 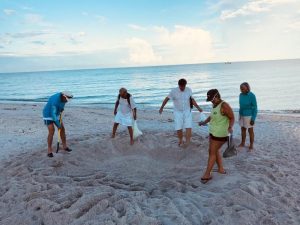 be residents and their family members who should know better, many people blame the holes on visitors. It has been confirmed that most of our rental companies on the island do provide information regarding sea turtles and the dangers of holes, beach furniture and lights at night on the beach, but it is of course up to the renter to read the material.

Another grave danger regarding holes on the beach is the fact that many people like to bury themselves in the sand. While it seems like a fun thing and a great photo opportunity, it is actually a dangerous practice that has cost people their lives. Sand holes are particularly dangerous because they can collapse on the people digging them. Once a person is buried in the sand, it is very difficult, if not impossible, to dig that person out and have a positive outcome. Sand shifts back into place even as people try to move the sand off of a trapped victim. Many people who have done it and lived to tell the tale describe feeling like they’ve had “a ton of bricks” on their chest, because as the sand settles back into place – as it always does – it constricts breathing.

Children who have dug holes deep enough to tunnel through have frequently become trapped when the sand collapses, and it is very difficult to dig them out.

The rule of thumb is to never allow anyone in your group at the beach to dig a hole deeper than the smallest person’s knees, and to always fill the holes in before you leave.

on’t do it, someone else will have to.