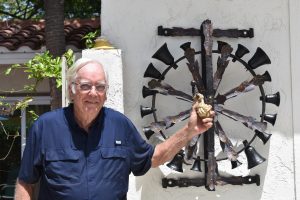 BY OLIVIA CAMERON- Just a week ago, master metalsmith Alex Klahm was back on Gasparilla Island with another restoration project, this time at a residence on First Street.

Klahm is a trusted lighthouse restorer, known for his work on the Gasparilla Island Lighthouse restoration project and 34 other lighthouses across the country. He had just returned to his home in Tarpon Springs after a project at Fernandina Beach when he was asked to make a stop in Boca Grande.

He was contacted to refurbish what he refers to as a “horse doorbell.” Laden with DuPont history, the doorbell is a wrought iron wheel of bells that rotates and rings loud enough for the whole street to hear.

“In my 40 years of creating custom metal work for people, I thought I’d seen everything, but not this,” said Klahm. “For this particular piece, I didn’t want it to look like a new piece of metal work, because it’s not. You could sandblast it, paint it with shiny black paint and polish the brass bells, but I thought instead it should look like what it is, which is an old piece of blacksmith work that happens to be in good condition.”

Despite the doorbell’s age, its value is in its pristine operation.

Klahm took into account the way it was originally made prior to restoring it. Each bell uniquely fits into a slot of the rounded metal slab, numbered in roman numerals.

“It’s always a challenge when you restore what a previous blacksmith has done. Some of the pieces you’ll look at and say, ‘Well, that can’t be done,’ but there it is, and somebody did it.”

With a few paper templates of the doorbell’s parts and a box of original pieces, Klahm kept the antique looking its age but spinning as if it were brand new.

“It’s been kind of an odd job, but I do blacksmith work, foundry work and fabrication,” he explained. “Usually, those are each different shops, but what works for the restoration work that I do is to combine each so people don’t have to go and find someone else every time someone says ‘this is cast’ or ‘that’s forged’ and ‘this is fabricated.’ You’ve just got one person to do it all.”

Klahm refers to the lighthouse restoration business as a “small world.” It all started when he restored the Key West Lighthouse in 1989.

“I thought it was an interesting job that kept me out of the bars at night. I quickly learned that people don’t want you to work on their lighthouse unless you’ve worked on someone else’s lighthouse first,” he said.

He recalled working with former Boca Grande resident Anthony Houllis, of Razorback LLC, on the island’s very own lighthouse.

“He sandblasted and painted the lighthouse here many years ago. We figured the neighbors would not enjoy having sandblasted particles all over their houses, so we completely covered the lighthouse in a giant bag and connected a large vacuum to it to collect and filter the hazardous waste,” said Klahm. “It was a sight to see.”

When he wasn’t restoring lighthouses, Klahm kept busy creating grand staircases for multimillion-dollar homes in Naples. He has also worked on a few projects for Disney in the midst of it all.

“Another historical preservation project was centered around the Vizcaya project in Miami, which James Dearing built in 1915. At the time, there were 40,000 people living in the city, 30,000 of whom were working on his home. I spent two years restoring the artifacts brought in from all over the world to his house.”

Klahm was on the National Metal Museum board in Memphis for 18 years, where historical metal work from across the country was displayed and blacksmith classes were offered to anyone interested.

He believes it to be a shame that shop isn’t taught in many public schools today.

“When I did a study in France, I learned about an apprenticeship to learn the trade and become a master who could own a shop. Here, people have to take a ‘school of hard knocks’ approach if they want to obtain the skill,” he said.

Once he finalized the horse doorbell, he gave it one last ring and grinned.

“This piece of work has lasted for 100 years, and with the beeswax and turpentine coat, it’ll last for 100 more,” said Klahm.