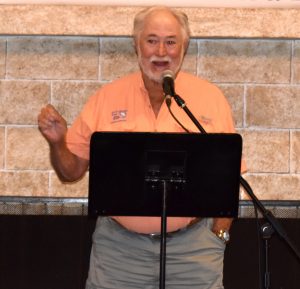 Honoring tradition. That was the common theme at “The Grande Tradition Event” held on Monday evening at The Crowninshield Community House.

Guest speakers from different eras discussed the history of the tournament and how it has changed over the years to focus on the protection of the fish.

“From the beginning, Sandy Bylaska was there as a judge and still is today,” Kean said. “What a remarkable woman.”

In earlier days, the biggest challenge was getting an accurate count of the most releases, according to Kean.

“The captains were honest and respectful and worked together as a team to make the event successful,” she said.

Kean recalls that one team was fishing in Boca Grande for the first time in July, and a man jumped into the Pass to get cool.

“As you can imagine all the chatter and hilarity on the captain’s radio, it brought us all to tears laughing,” she said. “Once the man heard there were sharks in the water, he quickly jumped back into the boat. This is a memory I will always treasure.”

Buddy Foster was a supporter of the tournament from the very beginning, and he respected the wisdom and dedication of all the local guides.

For this reason he donated a truck to the captain with the most releases.

In order to protect the fish, founders teamed up with Eckerd College marine biologists to find the best way to safely weigh the fish that would cause the least amount of stress.

“They came up with a technique to weigh the tarpon using a sling,” Kean said. “Think about that … 30 years ago that was truly history in the making.”

Cappy Joiner, president of the Boca Grande Fishing Guides Association, said that somewhere along the line, the tournament was moved from July to June.

“We had 33 boats and caught 60 fish in the first day of that next tournament,” Cappy said.

Cappy announced that this year he will be fishing for World’s Richest. The crowd reacted with roaring applause.

Capt. Jay Joiner was one of the most prolific captains in Boca Grande Pass prior to his death when he was just 25 years old. He died in October of 1992 after becoming the first captain to win the World’s Richest two years in a row.

The Belt Buckle, as well as a $1,000 cash prize, will be presented at a party at Hills Country Club in Rotonda on July 7. All Boca Grande Fishing Guides Association members and winning captains who are eligible to win the Buckle will be invited.

Next to speak at the podium was Dixie Hollins, the 2018 World’s Richest Tarpon Tournament head judge.

Hollins started fishing in Boca Grande with his father when he was 13. They would come down from Tampa, get on the ferry and head to the fish camp.

He recalls his dad saying, “This is how we fish down here – always be respectful of the island captains.”

He learned to mark the lines in green and red and use the seawall as a visual marker.

His dad always used to bring a cooler of pork loins and hams to give out to all the captains. He asked him why he did that, and his father told him it was because the Pass belonged to the guides.

As he grew older and brought his own boat to fish in Boca Grande, his dad told him if he ever heard stories about Dixie and his buddies not

respecting the local guides, he would forbid him to ever return.

“So I learned how to fish the traditional Boca Grande way,” Hollins said.

One day he had a fish on in the Pass, and someone anchored next to him. Three times he asked the other captain to move, but the boat remained next to him.

“So I did would Cappy Joiner would do and I ran over him,” Hollins said, as the crowd exploded with laughter.

Hollins started the Hollinswood Tarpon Tournaments in Boca Grande in 1996. They were all-release tarpon tournaments.

“We had a lot of fun at those,” he said. “It was at that time that this family community took me in as a lost child, and I’m grateful for that, and I honor this community in keeping up the tradition of tarpon fishing.”

Hollins said he is very honored to be the head judge this year.

“And we’ll do the best job that we can do to make sure everyone has a fun time … and that’s what it’s all about. Yes, the prizes are important, but the community, the camaraderie, the friendships and the memories are always the best.”

Capt. Lamar Joiner and Ms. Betsy Joiner were honored at the event for their many years of involvement in the tournament.

Wesley wrapped up the evening in a bittersweet way, presenting Betsy Joiner with a replica of the Jay Joiner Memorial Belt Buckle.

She gracefully accepted with son Lamar at her side.

Locke presented a similar replica to Lamar Jr., to be given to Lamar Sr. who was (naturally) fishing in the Pass.

A buffet dinner was catered by The Temptation Restaurant.

The World’s Richest Tarpon Tournament festivities will continue through Saturday.