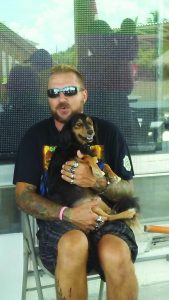 BY MARCY SHORTUSE – The Gulf was calm on the afternoon of Saturday, Aug. 25 when Shane Hale set sail from Marina Jack’s in Sarasota in his 30-foot sailboat, with his first mate Harley, the long-haired dachshund, but mid-afternoon it turned into a nasty blow that changed Shane’s life dramatically.

Shane was two miles offshore from Sharky’s in Venice when the storm hit with wind gusts up to 34 knots and big swells. The boom snapped in the chaos, and three holes sprung up in Shane’s sailboat. With broken toes and busted shins he scrambled to do what he could to fix the boom and work the bilge at the same time. The boat was in a spin when it started taking on water … and then the worst happened: Harley went overboard.

“He was wearing a life vest, and I had a 20-foot lead on him,” Shane said. “So I grabbed the lead and started pulling, but I came up with nothing but an empty life vest.”

Frantically scouring the water’s surface for as long as he could, Shane realized his boat would go under at any time. He started working frantically to keep the sailboat afloat and eventually called 911. The Coast Guard came to his rescue, as did Sea Tow Venice. Sea Tow got a pump working on the water in the boat and towed him in to Royal Palm Marina in Englewood.

While a friend of his was rewiring his bilge system, Shane started doing what he could to find Harley. Word went out on social media and spread very quickly, but most who read his posts really had very little expectation that the little dog would be found.

On Sunday evening, Shane received the call of a lifetime – Harley had been found, alive and well, by a couple who had driven out to North Manasota Beach to check on their vacant lot.

“There are just mangroves there,” Shane said. “They heard about the storm and thought they would drive to check things out, and when they pulled up they saw Harley walking out of the mangroves.”

Harley was taken to the vet, who determined he had a bit of aspiratory pneumonia and sand in his intestines, but was, amazingly, otherwise fine.

Hearty congratulations to Shane, and to the hale and hearty Harley!