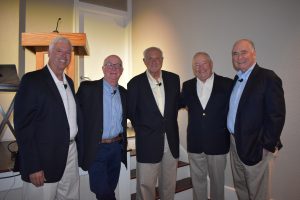 The 2020 Ecosummit presented by the members of the Boca Grande Economics Group detailed all of the US economy’s greatest challenges, current concerns, and future technological advances to affect our international relations. Members Jim Runde, Jeff Swift, Marty McFadden and Mike Giobbe each gave insight to tomorrow’s economy, alongside moderator and Board member of OBP Medical Inc. John Kissinger.

A number of topics were discussed amongst the five speakers at the Friends of Boca Grande Community Center event.

What’s been on everyone’s minds, the coronavirus, was one of the main topics of discussion.

“The emergence of the coronavirus, and the state and timing of our political environment, could be the elephants in the room,” said Kissinger.

The key the COVID-19 information and how it is to affect our economy was presented without the addition of useless media and data overload. As for the rest of their research, most was spoken to provide an understanding of where our economy is to take us.

As for the current pandemic, finances worldwide have already determined a steep decline, and the end result for now is uncertain.

Jim Runde, former Vice Chairman of Morgan Stanley, explained current national debt issues and the tension of foreign policy, with the goal of giving the public “news you can use.” He started the night off with a bit of foresight. “What do you call an economist that makes predictions? Wrong,” said Runde.

Instead of analyzing predictions, his research entailed how wealth taxes would only raise one trillion dollars over ten years to cover our record-setting national debt of $23 trillion. “I’ve got some other news which says it’s actually closer to $28 trillion,” said Runde.

He also warned of international theft and why artificial intelligence is to be designed in partnership with China. “Why do they want facial recognition? For surveillance,” said Runde. “And surprise, US companies are helping them with their artificial intelligence.” Companies including Microsoft and Google were noted to be a part of the AI progression, although the end goal is still uncertain.

Besides our concern of robots, our society’s distress for environmental preservation, businesses are now determined superiority by their ESG, or Environmental Social Governance. This points scale will give a number to companies to market their value. Runde explained this concept would create a positive turn for the environment but has also been met public shamming of other businesses.

With 30 years of experience in design, Jeff Swift discussed the digital economy. The public was informed on how the digital economy employment had been growing almost three times faster than overall employment. This is a topic of growth and something economists should keep an eye on in our future.

The services that undergo typical use are only to excel, and the industry can expand rapidly alongside international businesses in which tension should not add to. According to Swift, there are “unicorn” enterprises like Instagram and Lyft, which become billion-dollar businesses or more in just a year. With this, the economy won’t be able to look away from technological advances.

Marty McFadden, former Managing Director of Marsh and McLennan, reviewed health spending in the US.

“Currently, the US per capita health spending is more than twice as much as the other developed countries,” said McFadden. However, the life expectancy was a lower average than the countries with less spending. He recommended a different approach to health care based on those numbers alone.

Despite the quick change in political candidates for the Presidential election, McFadden also covered the different suggested health policies.

Mike Giobbe, who held a long-lasting New York Wall Street career, closed the discussion with a 2019 value recount. With a wrap up on past spending and what’s to come, Giobbe noted the potential change of equities and fixed income.

With all of this in mind, the Boca Grande Economics Group will continue to evaluate macroeconomic issues within our society in order to release the most notable material to the public and make positive proposals for the future of finances.

Newer PostSo long, it’s been good to know ya …
Older PostRound up your dogies and lasso your pardners … it’s bike parade time!