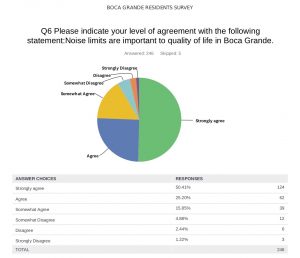 Now that community sentiment has been measured, the BGCPA will begin writing proposed revisions and additions to the existing Boca Grande Community Plan. When a first draft is ready, it will be made available for the community to read and respond to.  The BGCPA will then hold community meetings in person or online to discuss the proposals.

“We have a lot of work to do,” said Peter Solmssen, president of the BGCPA, “and we’re still open to comments and suggestions through our email address at bocagrandecpa@gmail.com.” 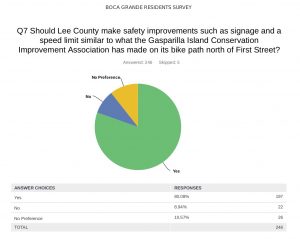 There are other sources of noise, as many respondents pointed out: Social events, construction and commercial vehicles.

And there is an existing Lee County noise ordinance. The Boca Grande Community’s response to a question about noise can be seen in the adjacent graph.

The remaining question on the survey related to the bike path south of First Street, which is not owned or maintained by the GICIA but by Lee County. The issue of the safety of the Lee County bike path prompted many comments about golf cart safety generally. Speeding, underage drivers and unsafe driving were the topics both in response to this question and in the general comments section of the survey.

The BGCPA received comments on topics not covered by the survey: parking, a drainage plan, fertilizer use, home delivery by the post office and Wi-Fi for the island, among others.

One of the most pungent comments was, “If you are still running for student council president go back to high school.”