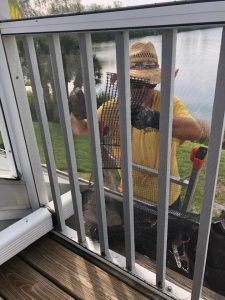 A colony of evening bats surprisingly became nightly entertainment in September for Susan Hanafee and Ian Rogerson at their home in Seawatch at the north end of the island. Each night at dusk, they’d watch from their second-story balcony as the little creatures took flight to find their twilight feast of mosquitoes.

But as the little colony grew from 13 to about 50, they knew something had to be done.  Although bats co-exist well with people, the droppings became a problem as more and more of them took refuge in a strip of flashing outside their home.

“We started counting them and decided they were not only having babies but inviting friends and relatives to live with them,” Hanafee said. “By July, we had almost 60.”

Humans can benefit from bat activity as they decrease insect population dramatically. Every night, an average bat consumes its body weight in insects – that’s roughly 6,000 to 8,000 bugs.

Their appetite for mosquitoes certainly makes a backyard more comfortable.

Evening bats are tiny and weigh between 6 and 14 grams, with a wingspan of 260 to 280 millimeters. The fur of an evening bat is usually dark brown, though some may have a reddish tint.

Hanafee said the bats were fun to watch.

“They’re very smart,” she said. “In the evening, they took off one at a time like fighter pilots heading out on a mission. When they returned in the morning – all trying to squeeze into a tiny opening at the same time – it looked like planes circling a busy airport. And they didn’t come out if it was

raining or if a storm was coming. It messes with their echolocation, which they use for navigation.”

According to Dan Bozone of “Friends of Bats,” evening bats are very popular throughout Florida and are known to roost in palm fronds.

“They make better neighbors than house guests,” Bozone said. “The hard part is getting them to stay out.”

September 5, 2019 was bat eviction day for Susan and Ian.

“Our little colony grew to 60 during maternity season,” she said. “It was time for them to move away from our house to one of the bat boxes nearby. They were an entertaining group and kept the mosquito population down. I was kind of sad to see them go.”

Bozone set up a one-way exit for the bats.

Hanafee said there are still about ten bats that she sees coming and going from her roof. The critters only need about a half-inch gap to get inside an enclosed space.

“They are very territorial and very determined,” Bozone said. “I’ve been in Boca Grande many times over the past 15 years, and we’ve chased them from house to house.”

Florida law requires that the bats be given at least four to five consecutive days of cold temperatures to relocate, so these particular ones may not be moving on for a while.

“We try to do it as gently and respectfully as possible,” said the bat eviction specialist.

Bozone’s business serves the entire state of Florida, but he said he spends about 70 percent of his time dealing with clients on the Gulf coast.

Five years ago, bat “belfries” were installed around the island to deal with the burgeoning homeless bat population. A half-dozen boxes were placed on state park land at the south end of the island, and 12 more were placed around Gulf Shores Drive.

In a 2014 article published by the Boca Beacon, Shari Blissett Clark, president of The Bat Conservancy, said there are 13 species of bats that live year-round in Florida and another four that have been sighted in the state.

There is at least one critically endangered species in Charlotte and Lee counties: the bonneted bat, currently the subject of studies by the Florida Fish and Wildlife Commission and the United States Fish and Wildlife Service.

“Florida bats don’t hibernate like some species because of the temperate weather,” Clark said.

Florida bats can live up to 20 years and most frequently are spotted in February or March.

Bat houses like the ones that were installed locally have taken some time to perfect.

“They need to be consistently warm during the day and night,” Clark said. “We usually place them in 12-foot- high open areas. They like dark interiors and small spaces, and they need a landing pad because they can’t fly up into an open space.”

To see some Florida native bats, be sure to check out Clark’s presentation today at 1:30 p.m. at the Boca Grande Community Center auditorium. The program is being sponsored by Barrier Island Parks Society.