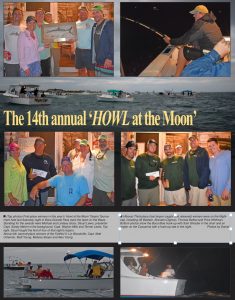 With 39 releases in three hours’ time recorded in the 2018 annual “Howl at the Moon” tarpon tournament last Saturday night, May 5, it was Capt. Waylon Mills and his anglers Michael Graci, Lindsey Graci, Stuart Lewis and Tanner Lewis who took home the big prize money of $5,400 with four releases.

The average release time for the tournament was seven minutes. Your complete release list is as follows:

First-place winners in this year’s‘Howl at the Moon’Tarpon Tournament held last Saturday night in Boca Grande Pass were the team on the Blaze. Standing for the awards were Michael and Lindsey Graci, Stuart Lewis, presenter Capt. Sandy Melvin in the background, Capt. Waylon Mills and Tanner Lewis. Top right, Stuart fought the first of four of that night’s tarpon.

Bottom photos show the Boca Blue hook-up with Sam Shrader in the chair and an angler on the Casuarina with a hook-up late in the night.