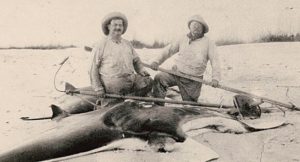 This is a picture of a manta ray. It is shaped like a triangle, but that’s not the most interesting part of this picture. The man on the right is Teddy Roosevelt. It’s possible it was taken on the beach in Boca Grande, but more likely it was Captiva. We know, however, that it was taken somewhere in Charlotte Harbor.

Teddy Roosevelt was a hunter and not very interested in fishing. He thought it too sedate. Yet here he is, having caught a manta ray on a trip to this area of Florida.

It was late March 1917. Roosevelt had come to Punta Gorda to join Russell J. Coles, who was a manta ray expert, having collected specimens for the American Museum of Natural History in New York. It was Roosevelt’s first foray as a hunter of the big game of the sea.

The manta ray or devilfish, as it was called, was not only large but had gained a reputation among fishermen as one of the most difficult creatures to kill. Russell Coles had killed many, including the largest specimen ever caught at the time, an 18-foot devilfish.

Hunting was an apt description for the process of catching the devilfish. The fishing party numbered seven – Roosevelt, Coles, three men from North Carolina who had been trained by Coles, Coles’ private secretary and a Florida fishing captain, Jack McCann, from the Keys. The party camped in a one-room house on a floating flat scow.

They fished from a smaller vessel using a harpoon called an “iron.” Connected to the iron was a length of rope, and on the end of the rope was a thick, heavy, square board called a drogue. When the iron was hurled at the ray and found its mark, the drogue remained in the boat and created resistance so that even if the harpoon’s handle broke, the fisherman had contact with the devilfish. Often the ray dragged the boat some distance before it tired. Then the hunter used a specially designed lance to kill the prey.

On the morning of March 26, the fishermen headed out with Roosevelt at the front of the boat with the harpoon. Soon they spotted a large, dark spot just below the water’s surface that the experienced hunters on board recognized as a manta ray. As the ray swiftly swam close to the boat, Roosevelt threw his harpoon but missed. He gathered up his harpoon and prepared for another try.

This time they spotted a small group of devilfish lying close to the water’s surface. Since these were not swimming, they presented an easier target for the inexperienced Roosevelt. This time he “ironed” the ray, which swam away dragging the boat behind him. In the next 11 minutes the manta dragged the boat about a half-mile. But once he tired, Roosevelt was able to jab him with the lance.

When they got the ray to shallow water, it turned out that even though the harpoon had pierced the devilfish’s heart, it still had the stamina to put up a fight.

On the next attempt, Roosevelt and Coles both hurled their harpoons at a large female devilfish. Coles’ bounced off, but Roosevelt’s iron stuck. Then Roosevelt put a second harpoon into it for good measure. Again the ray fought, and they were pulled for almost two miles before they could lance the fish. They dragged the ray to shallow water to measure it.

Roosevelt’s first ray measured 13 feet two inches tip to tip. The second one was 16 feet eight inches. While not record-setting, they were large rays. Roosevelt’s interest turned to studying the two devilfish, noting that their skin was rough, that the black pigment of their skin rubbed off when touched and that their large mouths had no teeth. After photos were taken, the rest of the trip was spent exploring the islands of Charlotte Harbor and their flora and fauna.

Newspapers covered Roosevelt’s trip from afar. Both the New York Times and Washington Post called the manta rays “marine monsters.” One paper reported that Roosevelt had drowned. The St. Petersburg Evening Independent corrected the misinformation with a headline “TEDDY HAS NOT DROWNED.”

To learn more about the history of Boca Grande and Gasparilla Island, visit the History Center at 170 Park Avenue or the website

“Our history makes us who we are.”