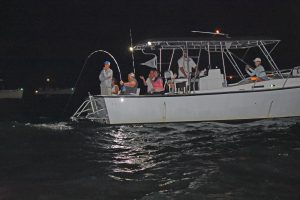 BY MARCY SHORTUSE- The sharks took more than their fair share of a taste of the action in the 12th annual Ladies Night Out Howl at the Moon Tarpon Tournament on Saturday, June 13, but Mother Nature is a cruel mistress. The toothy ones had it out for the silver kings, who took off to deeper water and scattered.

At least six sharks were hooked on tarpon baits during the tournament, and that’s six tarpon that were lost for the ladies.

In the end, it was a strategic move by Capt. Mark Crawford on team Dorado to fish the edge of the Pass in the shallow waters (waters with fewer sharks off the north end of Cayo Costa) with team leader, Susan Chitwood and her anglers, which included Shirin Vesely, Sophia Vesely and Angie Waters. Shirin and Angie had the two hook-ups for the win, an impressive feat for a first-time captain and anglers for this tournament.

Capt. Dave Chatham on the Jill Marie finished second, with one caught and released just before the tournament ended. Team Leader Jill Chatham fished with anglers Julianne Greenberg, Candy Brooks and Melissa Steyer. It was Steyer who caught the 9:54 p.m. tarpon.

The Ladies Howl winner’s circle is no stranger to this team, as they have placed many times since they started fishing together in 2015, when they took first place.

The tournament is sponsored by Special Effects.