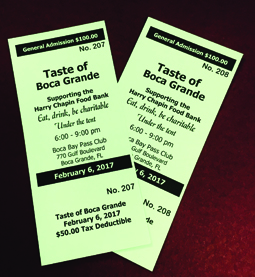 The coordinators of the 2017 Taste of Boca Grande have announced the 18 restaurants that will be participating in the event, and that tickets will be even easier than ever to get this time.

They are also available locally at the Boca Beacon office, the Boca Bay Pass Club, the Boca Grande Club, Michael Saunders, the BRC group and the Prime Time Steak House. This year they will feature The Brett Foreman band. They are a hip, organic, high-energy party band that has become a household name at premium venues throughout the state of Florida. Bandleader Brett Foreman manages productions utilizing years of experience, consisting of thousands of shows, and extensive training that began with the ‘Art of the Party’ curriculum at The Ritz-Carlton Philadelphia.