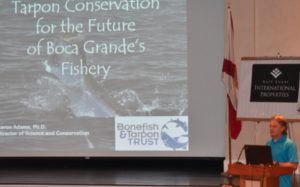 Before the fishing and fun began at the Gasparilla Island Kids Classic last Saturday afternoon, a symposium was held at the Boca Grande Community Center on Friday evening to educate participants about the history of tarpon fishing in Boca Grande. Dr. Aaron Adams with Bonefish & Tarpon Trust gave a presentation about the science of tarpon and why they seem to love our island waters.

“In the past 10 years, we’ve learned a lot about tarpon, but there’s still a lot more to learn,” Adams said.

He said it is especially important now to understand the impacts of our water management system, which has definitely been impacting our fisheries.

Tarpon can live up to 80 years, and do not start reproducing until they are about 10 years old.

Dr. Adams spoke about the issues that have been occurring with the natural runoff of Lake Okeechobee, and what happens to our estuaries when that water mixes in with the harbor and Gulf.

“These fish are slow growing and they live a long time, which means the fish we see today are reflective of what has been going on in the water for the past 40 to 50 years,” Adams said. “So how we manage the habitats today will impact the fisheries decades from now.”

Bonefish & Tarpon Trust staff collect tiny larvae that is only one day old from Boca Grande Pass, proving they come here to spawn, and as far out as 120 miles out into the Gulf of Mexico.

When there is a full moon, many of the tarpon head off shore.

Tarpon broadcast spawn, as opposed to building a nest. The fish get together in large groups, eject the eggs into open water, and the fertilization is done externally. The eggs hatch after about 24 hours.

When they are in the open ocean, the babies are perfectly clear so they naturally are protected from predators.

Joiner said when she was growing up, there was an abundance of shellfish like scallops and clams, which brought people to the area. Then the island became known as the world’s greatest place for tarpon fishing.

“I caught my tarpon when I was ten,” Joiner said. “And what is so fascinating today, is that some of you kids are going to be fishing with the grandfathers, uncles and even my grandchildren are charter guides now, so you will be learning from generations of experience. Our love of fishing and teaching others to fish is contagious.”

“The Boca Grande Fishing Guides Association took over the World’s Richest Tournaments for about seven years, and then passed the torch back to the Boca Grande Chamber of Commerce and it’s been successful every since,” Italiano said. “This year we had 29 boats and we put chance back into the tournament by having a prize for first and last fish on both days.”

In 1988, the wives of many of the captains teamed up to create their own day of fishing on Mother’s Day weekend.

“They called it the ‘mothers and others’ tournament,” Italiano said. “Those of you here today who know that group understand why it was called that.”

The next year, seven boats participated and that’s how the Ladies Day Tarpon Tournaments began.

In 1991, the all-release tournament grew to 50 boats and stayed that way for a number of years.

Capt. Sandy Melvin of Gasparilla Outfitters organized the first of its kind symposium.

A tradition south Florida mullet fry, complete with all the fixings, followed the presentation.

The event was free to all, but donations for the Boca Grande Historical Society were welcome.

Melvin said in the past seven years the young anglers, ranging in age from about six to age 15, have caught and released 112 tarpon, with an average release time of nine minutes.

“The captains work hard to make the fish are caught quickly and released healthy,” he said. “This teaches kids at a very young age how important sustainability is when it comes to tarpon fishing. The quicker the tarpon are released, the healthier they will remain.”

See next week’s Beacon for a story including more information about the effects of natural water runoff from Lake Okeechobee.