BY OLIVIA CAMERON- Sunscreen products are often displayed near the front in local markets, where people can readily pick up a tube and head to the beach. Sunscreen lotions and sprays were designed to protect us from the harmful effects of ultraviolet radiation, but they do no justice in protecting our marine life.

According to the National Oceanic and Atmospheric Administration (NOAA), the chemicals found in popular sunscreen products, including oxybenzone, octinoxate, octocrylene, benzophenone-2 and more can severely impair the natural growth of sea life.

Of course, sunscreen lotions do not cling to skin like glue, especially when they haven’t had enough time to soak in. The sunscreen rubs off, washes out into the saltwater and directly affects living creatures. The process of photosynthesis that allows green algae to grow gets disrupted, mussels may grow with defects, and the fertility of fish can easily decrease with a change in characteristics induced by these chemicals. Not only can this directly affect the living organisms, but these defects can also be transferred to offspring of certain sea life such as dolphins.

As many are aware, the coral reefs of our oceans have taken a direct hit. Reefs are continuously damaged from our own products. Public Information Specialist Michelle Kerr of the Florida Fish and Wildlife Conservation Commission recommends the research behind two studies. In a 2013 study conducted by the NOAA, researchers determined that the chemical benzophenone-2, found in soaps and other products, damages the coral’s DNA, which has stunted the growth of younger reefs significantly.

Similarly, oxybenzone has been proven to alter coral growth, disrupt the skeletal structures and make the organisms prone to bleaching. This study, conducted in 2016, has since been published in the Archives of Environmental Contamination and Toxicology.

As most things indirectly affect the economy, the rate at which our coral reefs thrive also comes into play. An article in TIME magazine, “A Most Beautiful Death,” by Justin Worland, points out that the local economies face billion-dollar losses annually, and sectors of tourism, commercial fishing and flooding are affected. 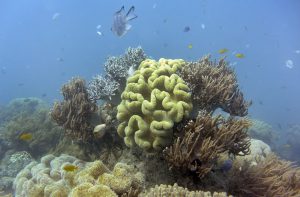 We often hear about the coral reefs dying at unbelievable rates, but it isn’t until the photos are analyzed that the difference is tangible. Coral reefs are typically thought of as having vibrant colors, but most now have a brown hue. Orange coral turns white when bleached and then may die, turning dark.

To keep corals vibrant and to protect the fertility of local marine life, eco-friendly sunscreens are an alternative to popular but damaging products. Sunscreens that replace harmful chemicals with zinc oxide and titanium dioxide do not have the same effect when mixed into the ocean. Even chemicals washed down the shower drain after being used simply for sunbathing end up in our oceans. Wearing clothing with an ultraviolet protection factor is another way to replace chemical-ridden sun sessions.

For more information on protecting marine life from the land, visit noaa.gov or myfwc.com.