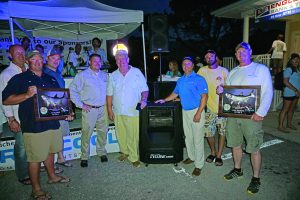 ■ BY MARCY SHORTUSE – Capt. Timmy Smith hadn’t caught a lot of tarpon this season up to the time of the 2016 World’s Richest Tarpon Tournament, held last week on Thursday and Friday, May 19 and 20. Maybe that’s because he was saving his mojo up for those two days, because he and his anglers were most certainly on fire.

By the time 2 p.m. on Thursday, May 19 rolled around, there were 26 boats headed out to Boca Grande Pass to compete in the World’s Richest Tarpon Tournament, held by the Boca Grande Area Chamber of Commerce. The purse for the tournament was at $104,000.

Tournament action was to begin at 2:30 p.m. on Thursday and Friday, and the Pass was rolling with some pretty rough waves. Just before lines went in the water, a moment of silence was given for Dr. Hank Wright, who passed away on May 16 at home in Boca Grande. His grandson, John DeLaVergne, was fishing the tournament and gave a brief eulogy over the marine radio for his grandfather.

It took a little while after the tournament start to get things moving, but at 2:51 p.m. the first tarpon was released by the team on Outta Line, with Capt. Blake Cheske. His anglers, including Team Leader Lewis Fernandez, angler Don Simon and angler Kacy Cheske, took the “First Day, First Fish Released” $9,800 prize, with Kacy (Blake’s wife) taking that first fish. Releases were steady throughout the first day of the tournament, even though the tide couldn’t make up its mind. Fishing ended that first day with the team on Casuarina with Capt. Charlie Coleman taking the “Last Fish, First Day” prize of $9,800. It was angler Daniel Hildreth who released that fish. Other anglers on the team included Team Leader Howard Wise, angler Emily Wise and angler Nicole Coleman. Capt. Timmy and his team, including Team Leader John Judson, angler Justin Davis, angler Joel Trost and angler Will Bonner, had four releases on that Thursday, placing them ahead on the first day of tournament fishing.

Capt. Frank Davis and his team on Native were in second place with three releases. In all there were 24 releases on that first day of fishing. On Friday the weather was calmer, the day was hot and the Pass was full. The first fish didn’t bite until 3:21 p.m., and that was on the Sundown. They got the “Second Day, First Fish Released” prize of $9,800. 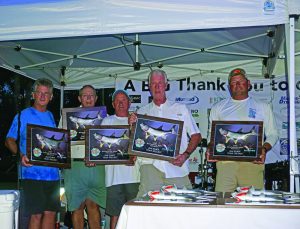 Throughout the afternoon Sundown continued on in the lead, but Capt. Waylon Mills and his team on Blaze, including Team Leader Roger Otto, angler David LeFevers, angler Don Bell and angler Jeff Fry, started to catch up quickly. They had three releases by 5 p.m., and they had two the day before for a total of five with still another hour and 30 minutes to go. Sundown at that point was still ahead by one, but by 5:57 p.m. they had their sixth release.

Action got really hot in the last 20 minutes of the tournament, with seven releases in that time by Squaw, Hey, Moma!, Faithful II, another for Blaze and one for Tracy Lynn. Then, at 6:28 p.m., the race between two teams – Casuarina and Sundown – began for the “Last Fish, Second Day” prize. Casuarina hooked up at 6:28 p.m., and Sundown followed suit seconds later, at 6:29 p.m. The two boats stayed out in the Pass for another 15 minutes, fighting their silver kings, until they both released seconds apart. Sundown took the win for the “last fish” prize as the judges announced his tarpon was released at 6:43 p.m., just about 12 seconds before the Casuarina team did, also at 6:43 p.m. 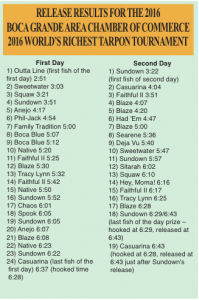 That meant that the Sundown team took the first place prize of $39,000 with seven releases over the two-day tournament, and also got $19,600 for getting the first and last fish of the second day (at $9,800 each).

The winning captain, first mate and anglers all got sterling silver tournament rings from Barbara Anne’s Jewelry & Repair, Yeti coolers were awarded to the captain and first mate, and Capt. Timmy also got a large outdoor cooling unit donated by Texas company Portacool.

The team will also be placed on the Chamber of Commerce’s perpetual trophy for the tournament. Capt. Waylon and his team on Blaze took second with six releases, two on the first day and four on the second day, and received a check for $26,000. They also got trophies for captain and anglers alike, and two Yeti coolers for Mills (he got two, since he’s his own first mate). When the president of the Boca Grande Fishing Guides Association, Cappy Joiner, came to the stage to present Timmy Smith with the Jay Joiner Memorial Belt Buckle, he expressed the feelings of many when he said how proud he was that one of the old-school tarpon captains had taken the purse. 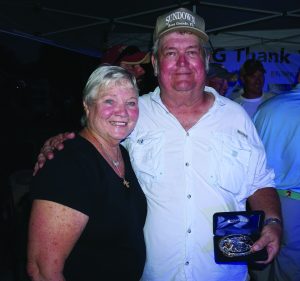 Betsy Joiner, the late Jay Joiner’s mother, was in tears and told the crowd how Timmy and his dad were long-time friends of her family. She also recognized a noted island angler, Peggy Denby, who employed Timmy as her own captain and “adopted son.” Peggy used to run the Billy-Bo Tournament on the island, and she passed away at the very end of 2014. “Peggy Denby was smiling down from heaven today,” Betsy said.