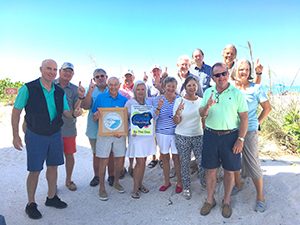 BY SUE ERWIN – A public meeting was held at Stump Pass Beach State Park on Tuesday, April 24 to determine the level of interest residents have in forming a nonprofit organization in support of the park.

More than 30 people attended the gathering.

The group would be called “Friends of Stump Pass” and would work in part with the Barrier Island Parks Society.

“We think it’s important to integrate the new group with BIPS,” said Sharon McKenzie, executive director of the Barrier Island Parks Society. “Whatever the organization raises will fund amenities and projects at the beach and park.”

The goal is to create a steering committee, which would include a core group of volunteers.

“Whatever you do for the group, you will be a Florida State Parks Service volunteer,” McKenzie said.

Florida State Parks Service Specialist Robert Longo said he’d like to get a volunteer coordinator for Stump Pass to get more volunteers in the park. The goal is to raise money to add amenities to the park.

“There are 175 state parks throughout Florida, and our mission is to provide resource-based recreation while preserving, interpreting and restoring nature and cultural resources,” Longo said.

The basic responsibilities volunteers would strive for in the park would be trail maintenance, cleanup and parking assistance to help park staff.

Another objective would be to add more pavilions and benches along the nature trail to provide shade for hikers. And also to add more interpretive signage along the trails, explaining the different kinds of plants and marking distances on the trail.

Longo said he also hopes to add more educational and interpretive programs at the park.

“Park staff organize a few each year, but it would be nice to have more volunteers to help,” Longo said. “That’s really the mission of a citizen support organization, to support the Florida state parks and support the community.”

The list is long when it comes to volunteer options. Help is needed in construction, carpentry, maintenance, office help, event planning and social media – just to name a few.

“We also will need a recording secretary to write minutes from the meetings,” McKenzie said.

The 1.3 mile public Stump Pass Beach was acquired by the state in 1971 by the Department of Environmental Protection. At that time the beach had just four parking spaces and no amenities.

In 2000, with state and local funding, the state added parking spaces, restrooms and a nature trail along Lemon Bay at the southern tip of Manasota Key.

McKenzie said one person from the new organization would always serve on the BIPS board, providing updates and financial reports.

She said that this summer, volunteers plan on creating a logo and a brochure so it’s available to share in the fall.

“Once the group is organized, it will be pretty autonomous,” said BIPS Board Member Richard Klepser.

The executive director said she understands parking is an issue at Stump Pass State Park, and not everyone who wanted to attend the organizational meeting could, so there will be one more meeting scheduled in May at the Elsie Quirk Library in Englewood.

The date will be announced in a future edition of the Boca Beacon.