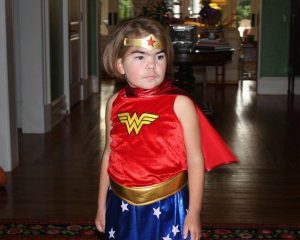 BY MARCY SHORTUSE – This is the story of a true island girl, and it is the story of her life … not her death. It’s not a story we ever wanted to write, but the time has come.

On April 4, 2017 Blair Chapin left us after battling two rare diseases, Sanfilippo syndrome and eosinophilic esophagitis, for her whole short life. She passed away with her family by her side and her dog, Henri, at her feet in her Orlando home. It doesn’t get much better than that, other than the fact the diseases that took her should have been cured long before she died.

Her mom and dad, Roger and Susan, and her little sister, Grey, said the entire family is grieving and missing her so much already, but they know she will no longer be dealing with the daily struggles she so courageously dealt with here on earth.

She was a beautiful teenage girl when she passed, 15 years old. She was born on December 21, 2001, and in some alternate universe she would have been worrying about getting her driver’s license and being asked to the prom. In this universe she experienced a lot of pain, as well as more love in her short life than many do in 90 years. Her parents were her champions, her sister was her world, and her dog was her soulmate.

Boca Grande was one of Blairʼs favorite places in the world, and she brought so much joy to all of us who knew her here. She was often seen around town in the company of her family, and always with her father. She loved spending time on the island swimming, jumping on her trampoline, taking golf cart rides and visiting the local shops like Palm on Park (she loved her Miss Kris, and Miss Kris loved her back fiercely) and The Barnichol. All of those things made the island a place she was always excited to come to.

It’s hard to imagine Easter egg hunts at the Community Center without seeing her, or Christmas Walks, or just any random day when she and Roger would pass below the Beacon office. While many people never look up, they always did. A day when you saw them out and about somehow seemed like more of a happy day.

Sanfilippo syndrome is a rare genetic disease. Roger and Susan have watched Blair’s decline since she was barely four. Videos of her at five show a bright-eyed girl singing her ABCs, but by the time she was six she had lost her ability to communicate verbally. For awhile she had her own words for things, and her family understood them, but that was eventually lost as well. Words aren’t always needed though, and those close to her could still communicate with her simply through her amazing personality. She could give a telling look about something she liked or didn’t like, and boy oh boy, could she smile.

But Blair couldn’t eat. She was missing an essential enzyme that breaks down strings of complex body sugars, and the partially broken-down sugars accumulate in the brain and the bodyʼs cells and tissue, causing progressive damage.

From the time Blair was diagnosed – and that took a lot of time, because Sanfilippo is considered to be an “orphan” disease, which is one that drug companies won’t invest much research time or money in – Blair’s family knew how little research was being done regarding Sanfilippo and EE. They took matters into their own hands by doing their own fundraising, and started by hosting lemonade stands on the island, as well as in her hometown of Orlando. They were called “Purple Lemonade: A Stand for Courage.” They raised thousands and thousands of dollars with the stands, and even won a $250,000 research grant from the “Pepsi Refresh” project.

For years Roger had used song and music to calm Blair during her struggles, and eventually the family started a campaign called “Sing for Blair.” Over the years they have raised more than $87,000, and many, many famous voices have sung for Blair, like Jimmy Buffett and Neon Trees. The enraptured look on her face in the videos showed her enormous love for music.

Eating “normally” for Blair a few years ago meant special juicebox-type drinks she had to have every few hours, but it was always a struggle. As time passed the feedings took more and more of a toll on Blair. Each one was putting her body through agony, even though it was what was keeping her alive. She eventually couldn’t keep food in her body, no matter how it was ingested. That’s when Roger, Sue and Blair’s sister, Grey, knew it was almost time to say goodbye.

So many people were affected by this beautiful soul. She could truly claim to be one of the most famous people on the island, without a doubt, because of the impact she and her family have had. Her uncle Patrick has climbed some of the world’s highest mountains in her name and has stood at the top with a purple “courage” banner. People have worn purple in her name and taken to the streets of Boca Grande in her honor. A friend posted a message for her on her Blair Banner Facebook page with a caption that said, “I was away from home but took a picture on the road of a purple tree for Blair.” She made such an impact, she was such a shining star, she was so loved.

As one friend said in remembrance of Blair, “Everything is better with B,” and that’s exactly right. It always will be, because she has become part of the spirit of our island.

Almost all funding for orphan disease research comes from private donors. If you would like to find out about making a donation in Blair’s memory, please go to theblairbanner.org,             facebook.com/purplelemonadestand, curesff.org or gofundme.com/iwontletgo.