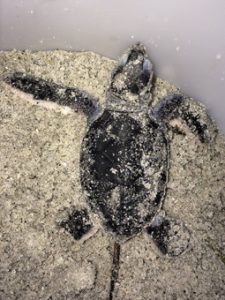 According to one patroller, as of Thursday afternoon, Sept. 1, there were only 22 nests left. About 19 of those were in constant washover and many others left in standing water. That was three hours prior to high tide. One patroller did have a good experience, though. “

It was a very exciting (Thursday) morning for turtle patrol on Gasparilla Island,” said volunteer Carol McDonald Forrester. “We braved the remnants of Hermine – strong winds, very high surging surf, wading through deep, murky puddles – to excavate a green sea turtle nest before the surf washed it away. How lucky for us! There was a pretty good hatch from the nest, but only one sole survivor. He’ll spend the day with us in his sand bucket and we’ll release him tonight. Our beaches and turtle nests have taken a significant hit, so we felt we had to do everything we could to preserve this hatch.”

Turtle patrol volunteer Melissa Csank released 58 baby loggerhead hatchlings on the beach at the Boca Grande Club on Wednesday evening. All of them made it into the water successfully.

Hatchlings face many predators, both on their way to the water and once they get into the ocean. On the beach, birds, crabs, ants, bobcats, raccoons and coyotes and even unleashed dogs are common threats to nests and newly hatched turtles. Once in the ocean, they face a host of marine predators until they reach adulthood. “Predator activity increases as hatching season begins, and there have been a few nests that have been opened or dug up by predators this season. Raccoon, coyote and bobcat tracks have been reported. Typically, less than 20 eggs (of nests with approximately 100 eggs) are taken; however, once opened, birds and ants can infiltrate the nest and cause even more destruction,” Csank said. One volunteer said ongoing coyote/bobcat destructive activity has been a problem in Zone 1 on the island for weeks now. Canine tracks have also been spotted around nesting areas. Dog owners are asked to please keep your pets on leashes at all times on the beach.

“There were several more predations last week. One nest in zone number 31 was a hatch about to happen. There were lots of partly hatched babies crushed as a result.” Coyotes continue to be a threat, but the invasions cannot be stopped because the animals are indigenous to the area. Another volunteer spotted two bobcats on the beach in one week: a rare occurrence, she said, after 36 years of living in Boca Grande.

“It concerns me that there might be a lot of offspring left here, with no natural predators populating our area. I also fear for my dogs.”

If you find hatchlings on the beach, it is recommended that you let them crawl to the ocean on their own, maintain a safe distance, and make sure lights are off so hatchlings don’t become disoriented. Do not remove them from the nest. If they are wandering away from the ocean or found during the day with birds circling, call the Florida Fish and Wildlife Conservation Commission at 888-404-FWCC for assistance.

The BGSTA is actively looking for volunteers. Training and supplies are provided. For more information, go to facebook.com/seaturtleawareness.