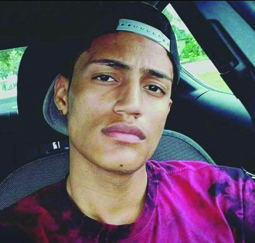 Several men and a dog set out from Pineland Marina in Bokeelia on Wednesday, July 27 in a continuing search for a swimmer missing from Boca Grande waters. The missing boy’s father, Edwin Castro, was one of the men. He is heartbroken, and he is exhausted from his efforts to find his son, which have gone on for weeks now. He will not stop praying, though, and searching for him.

Javier Castro disappeared while swimming off Range Light Beach on June 18. He was swimming with his family that day, and several of them became stranded on a sandbar off the beach. A rip current there was too strong, and they were afraid to cross it to come back to land. Javier went after them.

Everyone else had been rescued and was on land when a jet skiier who had been helping the family get back to land went back for Javier. But he was gone.

The man on the jet ski said he threw Javier a life jacket as he took the boy’s brother to shore, but no one is sure whether he was able to put it on or not, and it has not been found. Javier was last seen wearing black swim trunks with a blue stripe.

“There were divers and search dogs out there today, but we had no luck finding anything,” he said later Wednesday evening. Castro went out that day with search and rescue specialist Dan Griffith and Dan’s SAR dog, as well as a dive team.

It wasn’t his first … or his fifth time looking for his son since the search was officially called off a day after Javier’s disappearance. “

This was my ninth trip and I’m planning another one,” Castro said. “I’ve been going out for the past five weeks to the ocean and have not found his body or bones. I haven’t found anything.”

Castro said his family has been contacting hospitals throughout the state since the search was called off, “just in case by a miracle someone found him unconscious, or maybe he’s a John doe in a coma,” he said. “I’m not giving up until I find something.”

Castro has no boat of his own, so each time he goes out it is thanks to donations from friends back in New York, where the family is from.

A Gofundme page called “Hire a Search Team to Find Javier” has been set up. At the time of his disappearance, Javier was going to college full-time, working two jobs and helping his family with his younger brothers and sisters. He was, in fact, a hero to everyone who knew him, because he was such a good kid.

“And his last day here,” a family friend wrote, “he saved his sister’s and brothers’ lives.”

The Castro family asks anyone who sees anything unusual in the water, or along the shoreline throughout the area, to please call the Lee County Sheriff’s Office at (239) 477-1000.