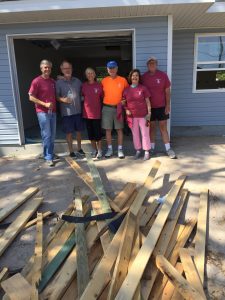 BY REGINA ROCKEFELLER – On Friday, March 2, 2017, a team of able bodied volunteers from St. Andrew’s Episcopal Church in Boca Grande and St. James Church in Port Charlotte painted the entire interior of a new single family home in Port Charlotte built by Habitat for Humanity of Charlotte County as part of the Apostles Build program. This is the fifth house built by Habitat for Humanity in Port Charlotte that St. Andrew’s has supported with its time, talent and treasure. Last year St. Andrew’s donated a significant portion of its annual outreach budget to this Apostles Build project with the approval of the church’s Outreach Committee.

Combatting homeless in Charlotte County is a priority for St. Andrew’s Outreach efforts. Habitat for Humanity builds 35 to 40 houses each year in the Port Charlotte area with the participation of 12 local churches.

John Lovo thanked and praised the St. Andrew’s team saying, “Many, many big ‘Thanks’ to each of you for all the good and reliable work. It was a quality performance in all respects. St. James was also (again) a good work partner in the Apostles Build.”

Following installation of the kitchen and bathroom fixtures and a paved driveway in the one level home, Habitat for Humanity will transfer ownership of this three bedroom two bath home subject to a manageable mortgage to a low income single mother with two daughters. The recipient of the house painted in March 2017 by St. Andrew’s and St. James holds a management position at a regional supermarket chain.

To be eligible to receive a home, a family must donate 300 hours of sweat equity to Habitat for Humanity, show two years of stable income history, have lived or worked in Charlotte County for at least one year, have no bankruptcies or court judgments against them, and have a clear marital status (cannot be separated) and a workable credit history. Prospective homeowners attend homeowner classes and make a financial escrow deposit.

The Apostles Build program helps St. Andrew’s Church and other participating churches to minister to persons in need outside the four walls of the church.

Newer PostArt for a great cause to be found at Smart Studio
Older PostCelebrate St. Patrick’s Day West of Galway