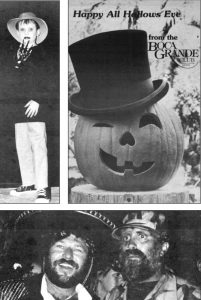 From Bocaween to the Halloween Carnival, our island has always held the Halloween holiday in high esteem. We may not have residential trick-or-treating, but we do have our own variety of haunting festivities to make the spookiest of nights complete.

Many years ago Halloween was – shall we say – an entirely different animal.

According to Capt. Dumplin’ Wheeler, one of Boca Grande’s original “Bad Boys,” no one was safe on All Hallow’s Eve when he was a kid.

An excerpt from a History Bytes segment a couple of years appropriately titled, “The Bad Boys of Boca Grande” with Capt. Dumplin’ Wheeler, Jackie Sullivan and Betsy Joiner …

One time of year that provided endless entertainment for Jackie, Dumplin’ and their friends was Halloween. They made it a week-long event and they took no prisoners.

“One of our favorite entertainments was pulling pranks on the deputy sheriff,” Dumplin’ said. “We were allowed to get out of school because of the Friday night fish fry before Halloween, and the boys got out of school to cut cabbage and skin fish – we always had fried mullet and smoked cabbage. We stayed drunk for a week, we were wide open and we did anything we could think of.”

Pushing outhouses into the four-way stop at 4th Street, pushing cars in the middle of the road … nothing was sacred. That was what Miss Rachel, an elderly woman who owned a dress shop where Gasparilla Outfitters is now, found out.

“We gave her a hard time,” Dumplin’ confessed. “We caught a cormorant, and if you know about them you know they go to the bathroom a lot. We knocked on her door, she came down and opened it and we threw the cormorant in there. It was flying all over the dress shop, she was swatting at it with a broom. The next day, she had a dress sale … 40 percent off.”

For almost 100 years children have been afraid to walk the island under the full moonlight, particularly on Halloween. It is then that the headless ghost of Joseffa the Spanish princess is said to walk the island. She was captured by the pirate Jose Gaspar, it is told, and when he failed to win her love he cut off her head in a fit of rage when she spat on him and cursed him. Legend has it he buried her body in the sand and kept her head in a container he could carry around.

Many sailors have reported seeing a headless figure combing the beaches of Gasparilla Island, trying to figure out where her head ended up.

Another old ghost story of our island is a beautiful woman seen riding a horse near Journey’s End, at the end of 18th Street. People who have seen the apparition describe her as having long, flowing hair and a white gown with an exquisite shawl.

Then you have the stories of Cayo Pelau where it is rumored that the spirits of multiple sorts, including some of Gaspar’s pirate crew and a victim of an unsolved murder, wander.

Some have said they could hear a baby crying as they neared the island, but could never find the source of the sound. Others have heard the tinkling of piano keys in the night.

It is also said the spirits of Native Americans indigenous to the area still haunt that island in search of their bones that were stolen by grave robbers.

In the 1980s and 1990s the island celebrated what was known as “Bocaween.” They usually had a competition between two groups – the “little kids” and the “adult kids” – to see who had the most fun. The kids had a Halloween Carnival as they do now, one that included Boca Grande Community Center Director Dee Wheeler stirring the cauldron and gazing into her crystal ball, a papier-mache pumpkin patch put together by island artist Marianna Alzamora, pony rides and, of course, the traditional cake walk. For many years there was also a Halloween parade.

Adults always got together at the traditional Millers Marina Halloween party (now called Boca Grande Marina). Hundreds would attend, and the costumers our island family concocted were always worth checking out (think Melissa Joiner Steyer as Aunt Jemima and more than a few flashers). The Laff-a-Lott (now South Beach) also had its fair share of years as the Halloween “go to” place.

Then there was the “Unnamed Gorilla.” There is some debate as to who was actually in that gorilla suit (or, for that matter, if it was a real gorilla), but whoever it was showed up for several years in a row.

This year’s celebrations include the annual Halloween Carnival, the Chamber of Commerce Halloween Walk and a Halloween party for “big kids” at Boca Grande Marina.

Go to the Boca Beacon Facebook page to see more flashbacks from Boca Grande Halloween celebrations from the past.

Oh, and be careful this Tuesday night when that first quarter moon rides the sky and the wind blows brisk down Banyan Street. There are still plenty of spirits afoot.