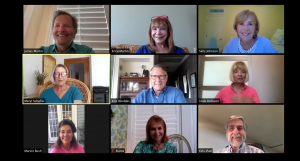 BY OLIVIA CAMERON AND ERICA MARTIN – The island’s famed performers of Spark Boca Grande will entertain from the internet with a distant play. With social distancing recommendations, the group has decided to put on a show for the people at home.

On Saturday, May 2 at 3 p.m., eight Spark actors will YouTube livestream a comedy by New York playwright and award-winning commercial writer Ed Gross. The Spark cast has been rehearsing through successful Zoom video conferences.

“Originally, I put it together so we would all have something fun to focus on,” said Erica. “It turned out we loved the play and are enjoying working for about 6 hours a week with him by Zoom.”

The actors may not have the luxury of much movement, but the auditory comedy will be something to tune in to.

What makes this performance so special is the talent. Some of Boca Grande’s funniest talents have spent weeks working with award-winning advertising writer turned playwright, Ed Gross. Together, in hours of Zoom readings, the dialogue and characters have come to life for Mr. Gross as he sharpens the comedic twists and turns in each draft.

Why would Kris Doubles, Sally Johnson, James Martin, Linda Rollyson, Margaret Bush, Elaine Skypala, Meryl Schaffer and Erica Ress Martin give so many hours of their time and talent to help a writer most of them have never met? Because it is the opportunity to stretch their skills and experience something few actors in Community Theater ever get to enjoy.

Erica, the creative leadership behind Spark, knew Ed and his sense of humor from her years in New York’s advertising world. When he mentioned the new play he was working on, she mentioned that she had lots of friends – actor friends – who had little to do during this time of social distancing. After reading this hysterical script, our island talents jumped at the chance to rehearse with each other several times a week, even if it had to be by Zoom, instead of in person.

“His Second Act,” a hilarious 90-minute show, takes us into the world of a British stand-up comedian, Reggie Barlow, who uses his wife Ellen’s missteps as punch lines in his act. Reggie mistakenly believes no one has the right to make fun of his own foibles, although he has the right to take anyone else’s life for his comedy. The laughs keep coming, as he learns not everyone agrees.

After a few weeks of working on “His Second Act” with the playwright, Kris, Maggie, James, Linda, Sally, Elaine, Meryl and Erica all agreed to stretch even further. Soon a Zoom livestream performance was in the works. The YouTube link will be in next week’s Boca Beacon.

The YouTube livestream of “His Second Act” is a perfect fit for Spark Boca Grande. It’s igniting the talents, creativity and interests of everyone involved and, hopefully, everyone in the audience.

Don’t miss “His Second Act” on Saturday May 2 at 3 p.m. It’s a whole new fun experience for all of us.