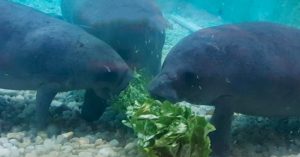 Snooty the manatee’s personality and charm gave face to the plight of wild, endangered manatees. He was also the spark that led the South Florida Museum to join the Manatee Rehabilitation Partnership (MRP) in 1998 and take an active role in rehabilitating sick or injured manatees so they could be returned to the wild.

Snooty died in 2017, but his legacy will continue to live on at the South Florida Museum, which is redoubling its participation in the MRP under new leadership. I have joined the Museum after a long career in manatee rehabilitation with the Lowry Park Zoo, where I played a key role in building the manatee rehabilitation program there, including authorship of a 35-page Husbandry and Rehabilitation Manual for the Florida Manatee.

My new role at the Museum will allow me to do two things I’m most passionate about: Helping to rehabilitate manatees so they can be returned to the wild and helping others learn how they too can save manatees.

I’ve been really privileged to work with manatees for most of my career in animal husbandry, and my goal, my desire, is to always do what is best for the animals and the most good for the species. At Tampa’s Lowry Park Zoo, I was able to supervise the manatee rehabilitation and release program and return more than 200 animals to the wild. Here, I will have the opportunity to build a stronger manatee care team and continue to have a positive impact on manatee conservation – to help the Museum have a first-class manatee rehabilitation program and to have the greatest impact on manatee conservation possible.

I became interested in helping animals at a young age while growing up in Long Island. I learned to care about animals from my parents, and we volunteered at pet shelters, and my parents helped me learn care and respect for animals. I’m excited to be able to share those values with the manatee care team at the Museum and with the public through the Museum’s educational programs about manatees.

The Museum is a Stage 2 rehabilitation facility – the place where manatees come after their critical care needs have been met. One of the Museum’s main tasks is bringing rehab manatees up to the right size and weight for release. Animals typically remain in the Museum’s care anywhere from a few months to more than a year. Since the Museum joined the MRP in 1998, it has rehabilitated more than 30 manatees.

The MRP is a self-governing group originally created by the U.S. Fish and Wildlife Service that is made up of organizations that participate in manatee rescue and rehabilitation. I am a former co-chair of the MRP and currently serve on its Manatee Release Committee, which helps to decide when manatees are ready to return to the wild.

Following Snooty’s accidental death in July 2017, the Museum immediately addressed the issues in his habitat that led to his death, to ensure that the habitat was safe for the rehabilitating manatees. This process included an underwater inspection of the aquarium facility conducted by aquatic engineers.

The Museum also created new tools and enhanced departmental and interdepartmental communications to ensure the safety of all staff and animals. Staff changes were also made when accountability was determined through the formal review of the circumstances leading to Snooty’s death.

Since that time, the Museum has been working with nationally recognized animal care experts, including myself, to restructure staff and make other changes needed.

My goal now is to rebuild the Museum’s manatee care team by working closely with its staff members. I’m embedded with the staff every day to learn the program’s needs, activities and how things are working. This allows me to teach and assess our staff needs and to consider our facilities and activities so that I can have the most complete picture possible of manatee rehabilitation at the Museum. Animal care is complicated – it’s both a science and art – and I am totally committed to building the manatee care program here and helping this staff to become the best manatee care team possible. Building a strong team takes time, and I think we are well on our way.

As the largest natural and cultural history museum on Florida’s Gulf Coast, the South Florida Museum offers engaging exhibits as well as educational programs that interpret the scientific and cultural knowledge of Florida, the world and our universe. For hours, admission, visitor information and special events, call: (941) 746-4131 or visit SouthFloridaMuseum.org.

At right, rehabilitating manatees Randall, Baca and Gale eat their lunch at the South Florida Museum in this fall, 2017 image. Randall has since been returned to the wild.