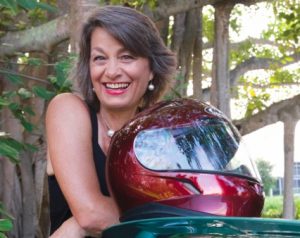 One in eight women in the United States will get breast cancer, and around 12 percent of women will develop invasive breast cancer over the course of their lifetime. Unfortunately, Boca Grande resident and pharmacist Kathy James is no exception to this rule.

Kathy is married to Dr. Ray James of the Boca Grande Health Clinic. She was diagnosed with stage 3C HER2-positive, hormone-negative breast cancer on their 26th wedding anniversary. That was May 25, 2017. Ray took the phone call while he was working as director of emergency medicine at Englewood Community Hospital. The pathologist said, “It doesn’t look good.”

The next day Kathy went in for a biopsy, and the following day it was confirmed.

“It was devastating and scary … a sucker punch for sure,” Kathy said.

Even though the 56-year-old had no history of cancer in her family, had never skipped her annual mammograms and even gave herself regular breast exams, she still received the alarming diagnosis. Never thinking she was at risk, she was shocked to find a lump in her left breast in May of 2017.

After more than a year of traditional treatment, she began talking with other medical professionals and found out she was a match for a clinical trial with a doctor in Tampa.

“I am currently receiving a cancer vaccine created by Dr. Brian Czerniecki at Moffitt Cancer Center in Tampa, which utilizes six weekly vaccine injections followed by three boosters, given at three-month intervals, six months after the completion of the weekly vaccines,” Kathy said. “I’m very hopeful and I feel great.”

Kathy was featured in an article in the October 15, 2018 edition of Time Magazine, which explained the relatively new and effective discoveries of cancer treatment using immunotherapy. The magazine’s editors had reached out to Moffitt Cancer Center and asked them to refer a patient who was undergoing this treatment. The hospital put them in touch with Kathy.

The article talks about the pioneering study that Dr. Czerniecki is doing to test a completely different way of fighting breast cancer – not solely with chemotherapy, radiation or surgery but by harnessing the power of one’s own immune system.

This study and dozens of others like it are potentially rewriting the manual for breast cancer care, giving patients unprecedented options for controlling their disease and possibly even curing it.

The immune system mounts the body’s defense and offense against unwanted intrusions: bacteria, viruses and even cancer cells. Cancer, however, poses a tricky problem. Malignant cells develop from normal cells that start to grow out of control, and the immune system is specifically programmed not to attack the body’s own cells.

Kathy was intrigued by the idea of training her body to fight her cancer as a more sustainable solution than short-term cycles of chemotherapy or radiation alone.

“Because my type of cancer tends to recur, and because it’s aggressive, I couldn’t just stop once my year of treatment was up,” she said. “I needed to keep going.”

Kathy said she used to be feisty – and now she’s even feistier. The high-performance driving instructor uses her 2001 Porsche 911 twin turbo on the track in Sebring, Fla.

It took her four years to get to the instructor level. She traveled to Savannah, Georgia to take her certification test. To add to the challenge, there was a freezing rain, and she had never been on the track before.

“It was intimidating, but like a true adrenaline junkie I made it through and passed,” Kathy said.

When they began racing, Kathy and Ray had three young children and would bring them along to the track for the events. She hasn’t raced for about three years now.

“It requires so much mental astuteness, and I’m just not confident that I have the mental capacity to react and make decisions quickly at this time,” she said.

For mental and physical wellbeing, she runs two miles every day.

But spreading awareness about clinical trials is her main mission.

“To my sister warriors, find something you can do for at least 30 minutes every day,” Kathy said. “Not only will it help keep depression and sadness at bay, it will help you feel better. Sadness and overwhelming feelings come in waves. You can’t anticipate it, but exercising will help when those waves come.”

To those currently in search of the most recent clinical trials, Kathy recommends utilizing the website clinicaltrials.gov and insidersguidembc.com for up-to-date resources and information about breast cancer.

She’s committed to being an advocate and spreading awareness by sharing her story.

“I’m not intimidated by this, and I’m not afraid to talk about it,” she said. “If there is any way I can help anybody, I want to do it. When I was growing up, people would whisper when they used the word cancer. I want to change that.”

Ray and Kathy started the Englewood Community Care Clinic, Inc. on San Casa Drive in January 2011, along with some incredible friends in Englewood. The clinic provides no-cost services to underserved residents of Charlotte and Sarasota counties. More than 3,000 patients have been treated over the past seven years.

They’ve been enjoying life in Boca Grande since Ray accepted a physician position at the island’s Health Clinic in March 2018. They now have four children: Jonathan, Ashley, Savannah and Alexandra.

Kathy has been involved with Moffitt Cancer Center in Tampa and the nonprofit “Pennies in Action” to help create awareness in the fight against breast cancer. The 501(c)3 organization has a support team for Dr. Czerniecki and his clinical trial.

“The organization is headquartered in Pennsylvania, and many women travel across the country to participate in this trial,” Kathy said. “There are so many barriers to treatment, like price and travel costs … this organization helps women access the treatments by raising funds to help deal with the costs.”

Being an advocate for cancer patients came into clear focus for Kathy after being an advocate for students most of her adult life. Since she has “been there, done that” she’s created a “cancer suggestions” worksheet to share with others. Some of the suggested items on the list include keeping a journal and always looking for the silver linings in life.

“You won’t feel ‘near normal’ again for a year-and-half, at least,” Kathy said. “Try to be patient with yourself. Let your family and friends help you through this. You don’t have the control that you once had. Get used to it. Model good behavior for others and be good to yourself. Everyone experiences cancer differently, and people react differently to the treatments. Let yourself have your own journey. Find as much joy in life as you can … and stay informed.”

Kathy said her take-away from the experience could be summed up by the following four words: Perspective, awareness, resiliency and kindness.

“If there could be a vaccine to prevent this for future generations, that would be phenomenal. I’m choosing to make deliberate choices about the important commodities like life, love and time.”