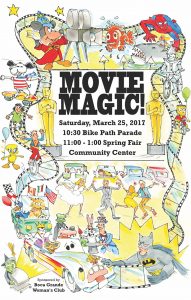 The “Magic of Movies” is coming to Boca Grande on Saturday, March 25, beginning at 10:30 a.m. with a star-studded parade along the Bike Path.

Hollywood-inspired golf carts, bicycles, wagons, and scooters will assemble at 5th Street at 9:50 a.m. If you haven’t preregistered, there is an open-casting call for late entries at 9:45 a.m.

Led by the Lemon Bay High School marching band, jazz band, and ROTC unit, and headlined by the children of The Island School as Honorary Grand Marshalls, the parade will conclude at the Community Center.

“Oscars” will be awarded in the following categories:

The concessions team will be grilling hotdogs, hamburgers and cheeseburgers, brats, and veggie burgers (cash only, please).

The very popular “Bake & Take” will open at 11 a.m. in the Woman’s Club Room and will have homemade casseroles, soups, breads, and sweet treats for sale (Credit cards accepted).

One attraction sure to be a “big hit” is the dunk tank. Warm up your pitching arm so you can dunk some of our local celebrities! Starring in our “Under the Sea” event are Fire Chief C.W. Blosser, Island School teacher J.T. Tremaine, TIS Head of School Jean Thompson, Rev. Matthew Williams of the Boca Grande United Methodist Church, Woman’s Club President          Angela Steffan, Chamber of Commerce Executive Director Wesley Locke, local celebrity Marshall Locke and Pass Club Tennis Pro H Wetzel.

Lights! Camera! Action! The movies are about to begin!

Newer PostThe end of a golden era: You will be missed, DR
Older PostA bike path from Rotonda to Boca Grande coming soon to Placida Road