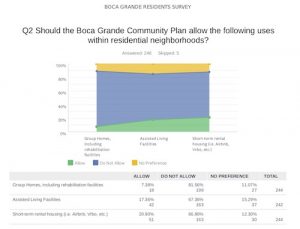 STAFF REPORT – Two topics that have been the focus of islanders’ attention during the past year were covered in the recent Boca Grande Community Planning Association survey: What should be permitted in an area zoned “residential,” and should there be restrictions on rental activities, such as Airbnb, Vrbo and “hotel houses?”

The survey results are in the two charts on the graphic shown here. The many comments reflect how complex these issues are, and how strongly islanders want to keep their low-key and quiet living environment.

“We don’t have accommodations for the increased traffic throughput or increased parking that would come from group homes or assisted living facilities nor do we want the look and feel of other than a purely residential island supported by the commercial needs of those residents living in residences,” was one very direct comment.

A topic that made the front pages of the Boca Beacon; the establishment of commercial assisted living facilities in residential areas provoked many comments.  While generally negative – 67 percent of respondents disapproved of ALFs in residential neighborhoods  (“No ALF ever in Boca Grande. Not compatible with the Gasparilla Act”) – there were comments reflecting a desire for those needing assistance to reside on the island (“I would like to be able to stay on the Island in a nice ALF (operated by the Inn?), when I am no longer able to stay home.”).  Some objections to group homes and ALFs focused on the effects on a neighborhood. (“Group homes and Assisted Living facilities allow the possibility of conversion to drug rehab facilities.”)  ALFs are regulated by the state, but their location is largely a question of county regulations and interpretations.  They are commercial operations treated as“residential” by Lee County and can therefore be placed in any neighborhood.  Lee County is currently applying density rules for ALFs that conflict with the Gasparilla Act.

The question of short-term rentals provoked many comments.  Most of them focused on behavior of renters and overcrowding rather than the fact that houses or condos are being rented. “We are having severe problems up north with short term rentals  more people in homes than allowed by capacity, etc.”  While most responders objected to short term rental uses in residential areas, the comments reflected that rental properties are a key part of the island’s community and economy.  This is also a complex topic.  Many communities have struggled with the impact of Airbnb, Vrbo and “hotel houses.” The Florida state legislature has repeatedly stepped in to prevent local communities from adopting zoning restrictions.  The comments to the survey suggest that island residents appreciate the flexibility of having rental units available (“short term rentals are the economic engine of this community, however, they should be done through an entity with island presence.”), while reporting a need for regulation.  Several residents suggested requiring local rental agencies to be used, which is a requirement several Florida communities have adopted.

Newer PostIf you’re leaving town, donate those non-perishables
Older PostIsland outfitter finds a way to keep up with the ‘rona and the sun, while honoring local artists