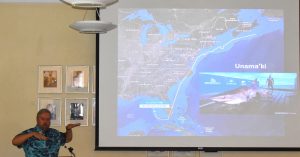 Dr. Robert Hueter is what some people may call a shark specialist. The Mote Marine Laboratory and Aquarium scientist is the director of the Center for Shark Research.

Hueter spoke at the Boca Grande Community Center on Tuesday morning about his decades of work focused on shark research. His presentation was titled, “Mote Shark Research from Nova Scotia to Boca Grande.”

Some of his recent research includes hammerhead and bullshark conduct in Boca Grande Pass.

“We were in the Pass during tarpon season, so we tagged a few of them to better understand their habits of residency,” Hueter said. “We’re planning to return here this spring to tag more sharks to help us understand more about them.”

He added that sharks make this world a better place by balancing life at sea.

“It’s very important to have top predators in any ecosystem, and sharks play that role in the ocean,” he said.

The shark population took a severe hit over the past three decades due to industrialized commercial fishing.

“The good news is that here in the United States we have changed the regulations to help reduce this damage.”

One of the slides during his presentation explained that although sharks have somewhat of a bad reputation, they kill an average of eight people each year, and said people have a better chance of a coconut falling on their heads.

“Just don’t swim in Boca Grande Pass or those probabilities will change,” he said as the crowd laughed.

Hueter has been tracking Unama’ki, a North Atlantic white shark that has traveled from Nova Scotia to Boca Grande. It was PIT (Passive Integrated Transponder) tagged and was last “pinged” on November 20, 2019 around 10 p.m. in Boca Grande Pass. A PIT tag is a small radio transponder that contains a special code, which allows scientists to track and monitor fish, reptiles and birds. Unama’ki weighs more than 2,000 pounds and is 15.5 feet long. Hueter helped tag the shark on Sept. 20. It traveled more than 2,000 miles to the Gulf waters. Unama’ki’s name is derived from the Mi’kmaq language, which is indigenous to Nova Scotia, as well as other parts of Canada and the United States. In English, it translates to “land of the fog.”

Hueter discussed the fact that shark fishing laws changed earlier this year, and a permit is now required for all shore-based anglers 16 and older, including those 65 and older who are normally exempt from needing a fishing license. Chumming is prohibited when fishing from the shore, and the shark must be released right after it is caught. The online course is available for free at myfwc.com.

This was the first “Coffee with a Scientist” free public event of the season.

The Mote Center for Shark Research is a national research center established by the U.S. Congress in 1991, to conduct research and outreach on diverse aspects of shark biology ranging from biomedical applications for human health to shark ecology, fisheries and conservation. Dr. Hueter has been a marine biologist for more than 40 years, has published about 200 scientific articles and reports on sharks, and has edited six volumes on shark biology. His current research includes field and laboratory studies of shark abundance, behavior, ecology and fisheries in the northwest Atlantic Ocean, Gulf of Mexico and Caribbean Sea, including in Mexico and Cuba. He’s been with Mote Marine since 1988. Dr. Hueter earned his bachelor’s and master’s degrees from the University of Miami and his Ph.D. from the University of Florida.