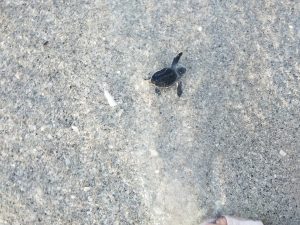 Boca Grande is very fortunate to have a sea turtle patrol association that is dedicated and vigilant. Some of the islands surrounding this area have properties that have been in violation of the ordinance to wildlife safety in the past few weeks.

There have been 20documented green sea turtle nests on island so far this nesting season.

As of Friday, August 9, there were 585 nests documented by patrol volunteers (20 were green nests and the rest loggerhead), and 635false crawls have been reported. A false crawl occurs when a turtle makes its way onto the beach but doesn’t produce a nest. Patrol members said they expected a high number of false crawls in June due to the beach renourishment project.

There were 382 Loggerhead turtle nests documented on Cayo Costa this year, and 17 nests are Green turtles.