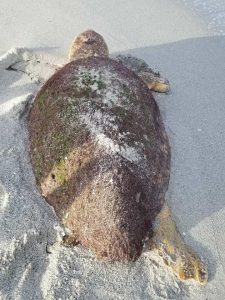 Boca Grande Sea Turtle Association patrol members had an interesting morning earlier this week. After hearing about a report of a live adult turtle wandering on the beach, they came across a loggerhead female turtle that appeared to be sick. Volunteers contacted the Florida Fish and Wildlife Conservation Commission, and the 232-pound turtle was taken to a local rehabilitation center. Her prognosis as of press time was good.

“Turtle nesting is starting to drop off, and hatching continues to be in full swing,” said Boca Grande Sea Turtle Association Board member Mel Csank. “It’s very busy for the patrol members right now, as we recently surpassed the middle of the season.”

There have been 20 documented green sea turtle nests on island so far this nesting season.

As of Friday, August 16 there were 590 nests documented by patrol volunteers (21 were green nests and the rest loggerhead), and 632 false crawls have been reported. A false crawl occurs when a turtle makes its way onto the beach but doesn’t produce a nest. Patrol members said they expected a high number of false crawls in June due to the beach renourishment project.

There were also 382 loggerhead turtle nests documented on Cayo Costa this year, and 17 nests are green turtles.

Association volunteers would like to remind everyone to be cognizant of your surroundings when visiting the beach. Sea turtle nesting season officially began on May 1 and runs through October 31. It’s more important than ever to remember to cover up holes and knock down sand castles when visiting the beach during the next few months. Always dispose of any trash, and remember – no lights at night.