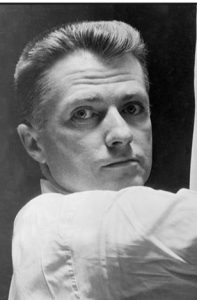 Tim Seibert and Paul Rudolph were both drawn to mid century Sarasota because something new was happening there, new ideas about the direction of architecture and its possibilities in the post World War II era, The availability of new technologies and materials would make it possible to realize new con- cepts. National publications began to focus attention on the nascent movement.

Soon after arriving in Sarasota Seibert got a job as a draftsman in Rudolph’s atelier. Luminaries of the architectural world dropped in for lunch. The conver- sation was scintillating and snarky. “Philip Johnson was a nasty guy,” recalls Seibert. He once called Frank Lloyd Wright “the greatest architect of the nineteenth century” and later nicknamed Rudolph’s Art &Architecture building at Yale “Edifice Rex.” It was heady stuff for an acolyte. “I didn’t feel too badly about mistaking Johnson for a vacuum cleaner salesman when I answered the door,”

deadpanned Seibert. Seibert tripled his salary when he joined the firm of developer Philip Hiss, one of the moving forces behind Sara- sota’s mid century cultural renaissance. He designed The Hiss Studio when he was only 28 years old, which is still con- sidered by some the most elegant house in town.

Didactic by nature, Rudolph often stopped by the Hiss Studio to offer Seib- ert a critique of his work in progress. Though sometimes scathing, Seibert al- ways considered it constructive and well intentioned. They were friends as well as colleagues throughout the Sarasota years and beyond.

“When Paul arrived in Sarasota he was unsure of the direction his work would take and lacked impor- tant connections. He entered into a productive asso- ciation with Ralph Twitchell, already established as a talented architect-builder but decided after four years to form his own firm.

Shy and reticent, Rudolph was a one man show. Siebert remembers that “Paul was always at the drawing board, working in his characteristic render- ing style” As a gay man, he lacked the distractions of family, channeling his energy into his work. When asked whether his gay orientation was responsible for his solitary life, Seibert says, “I don’t think he knew at that point, I don’t think he had figured it out.”

A seminal figure in what came to be known as The Sarasota School of Architecture, Rudolph designed some of the most innovative and imaginative houses being built anywhere, often employing inexpensive materials.The Sarasota Architectural Foundation of- fers tours of some of the most notable (The Cocoon House, the Walker Guest House and The Umbrella House) on a regular basis.

Although the Florida houses were small projects designed for a tropical climate, they had an enor- mous impact on the thinking about what architecture could be. “These small jewels of architecture had a clarity of concept and romantic, sometimes heroic, spaces. He was a form giver,” says Seibert. “It’s the concept that counts.”

On the strength of his work in the Sarasota area and the media frenzy it generated, Rudolph was se- lected Dean of the School of Architecture at Yale. His mentor while a student at Harvard’s Graduate School of Design was Walter Gropius where he was trained in the formalism of the International Style. As the Florida houses signal, Rudolph would break out of the box to work in many genres.

Association with Yale brought Rudolph good con- nections and work from government, academic and corporate clients whose projects demanded a style that called attention to itself. Rudolph began work- ing in the appropriately named Brutalist tradition. But the heavy concrete structures with rough hewn sur- faces like the Art & Architecture School he designed

at Yale (1963) brought as much notoriety as acclaim. To some its monumental pres- ence seemed out of synch with the anti- authoritarian spirit which characterized opposition to the Vietnam War and dis- trust of so called immutable institutions. It was burned down, some say, by students. New Haven’s fire chief suggested the fire might have been deliberately set or the building fire bombed based on the fire’s rapid spread, although the New Haven fire marshall dismissed arson suggesting that flammable substances in open con- tainers were the likely cause. The building was subsequently redesigned and resurrected under the direction of Charles Gwathmey in 2009.

After the fire Rudolph suffered the psychological equivalent of “the bends.” The dramatic ascent that brought him to the attention of the world was fol- lowed by an equally sudden descent. It must have been a crushing blow to have what some thought his masterwork torched by students, if indeed they were responsible, especially because teaching was cen- tral to his work as an architect. Berkeley architect Charles Moore, who succeeded Rudolph at Yale, im- bued the school with an entirely different spirit. “He (Rudolph) did things by himself and seemed to make people like it,” said Moore. “I disapprove of the Art & Architecture building whole-heartedly because it is such a personal manifestation for non-personal use. However, I enjoy very much being in it.” Moore echoed a common complaint. Rudolph’s urbanism did not promote interpersonal interaction or community.

New York Times architecture critic Ada Louise Huxtable dismissed his work, along with that of Philip Johnson and Kevin Roche, as “Establishment architecture.”

Perhaps the coup de grace was delivered by Robert Venturi in Learning from Las Vegas who suggested that the hyper expressionist monumentality of Rudolph’s buildings constituted decoration itself. The buildings were concrete sculptures. In criticism which seemed to be directed especially to Rudolph, Venturi wrote: “It is all right to decorate construction but never to construct decoration.” The book had a devastating impact on Rudolph’s career although he never defended his work against Venturi ’s criticism. Venturi later apologized to Rudolph for the severity of his remarks.

The burning of the A&A building precipitated Rudolph’s withdrawal from the public sphere. Out of the glare of media, he worked quietly completing civic and academic commissions. Life in New York City brought him in touch with rich clients whose res- idential commissions supported his late career. Ac- cording to his biographer Timothy Rohan, “These projects had a markedly more sensual and at times dangerous quality to them, different in tone from the joyful explorations of the 1950s Florida houses.” The publication of the homoerotic interiors of his home at 23 Beekman Place was too revealing for some, suggesting that his work was too self indul- gent and expressive, too outré for him to be consid- ered a spokesman for the profession.

The white villa he designed for Sid and Anne Bass in Fort Worth, reminiscent of Wright’s Falling Water, along with the Bass office complexes, telegraphed a new direction for Rudolph which found full expres- sion in his later work abroad.

Eventually he ventured far beyond the borders of the U.S. to Hong Kong, Singapore and Jakarta where he achieved a life long dream, the design of breathtaking skyscrapers whose sinuous curtain- walls of reflective glass and idiosyncratic protrusions would grace the skylines of Southeast Asia. “The photographs make me want to book passage just to see Paul’s buildings,” says Seibert. Rudolph enjoyed working with his Asian clients although the vagaries of the economies in that part of the world could cause problems getting projects off the ground or seeing them to successful completion.

Much like his father, an itinerant preacher who journeyed throughout the South, Rudolph was an itinerant teacher. His peripatetic career, moving through the intellectual and geographic landscapes of the world, ended in 1997 when he died at age 78 from mesothelioma, the result of early exposure to the asbestos used to mothball ships when he served in the U.S. Navy, the same material later used as the protective coating for the sloping roof of the aptly named “Cocoon House.” He left his estate, including his archives, to the Library of Congress.

Life in Sarasota was good when Rudolph and Seibert were Young Turks. Memories of pleasurable lunches at The Plaza and after work carousing at Main Street’s watering holes evoke fond memories. Was life simpler then? At least the process of doing architecture was. “Not a single permit was issued by the City of Sarasota for anything built in Lido Shores,” says Seibert.

Rediscovery of Rudolph’s Florida houses in the early 90s piqued renewed interest in his oeuvre. “Rudolph’s buildings are increasingly appreciated in the early twentieth century for their dramatic aes- thetic and spatial qualities, the very things for which they were once reviled,” observed Rohan.

Musing on Sarasota today, Seibert speaks of what Sarasota could have been and the nightmare it has become: “I don’t even want to go there anymore,” he said ruefully.