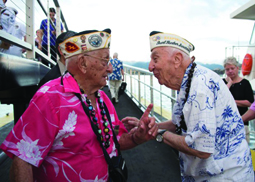 The U.S. military and the State of Hawaii are hosting a series of remembrance events throughout the week to honor the courage and sacrifices of those who served during Dec. 7, 1941 and throughout the war in the Pacific theater.

As a Pacific nation, the U.S. is committed to continue its responsibility of protecting the Pacific sea-lanes, advancing international ideals and relationships, well as delivering security, influence and responsiveness in the region.