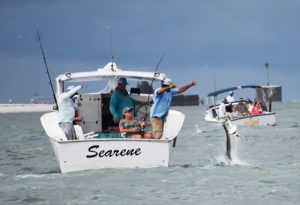 BY MARCY SHORTUSE – It was a very eventful few hours on the evening of Saturday, June 15 as the anglers participating in the Red Gill Invitational Tarpon Tournament brought 67 releases to the boat.

The tournament benefitted the Gasparilla Island Maritime Museum, and tournament coordinator and founder William Woodroffe donated $1,000 from tournament entries to the museum. Another $400 was raised for the museum through a raffle.

A complete list of releases is not available, as the gods of the sea whipped up a storm and the clipboards got wet.

Newer PostWe’ve got a whole lot of new sand on our beach!
Older Post5th Street beach access is now open