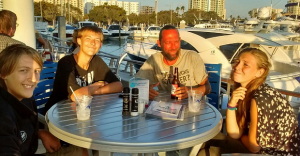 BY MARCY SHORTUSE – The Coast Guard announced this evening they located a body near the debris field approximately 40 miles off the coast of Sanibel at approximately 4 p.m.

The debris field believed to be associated with the missing family was located this morning.

Authorities are searching for a missing family of four who left Sarasota early Sunday morning on their 29-foot sailboat, enroute to Fort Myers, and have not been seen since. During their last contact with family members it was determined they were somewhere around Englewood or Boca Grande Sunday night.

The man, Ace Kimberly, 45, and his three children – 17-year-old Rebecca, 15-year-old Donny and 13-year-old Roger – were reported as missing by Ace’s brother who lives in Fort Myers. The brother reported the family was enroute to meet him to do some work on the boat. At approximately 3 p.m. Ace called his brother to tell him they were experiencing swells of three to five feet and thunderstorms, and that he was “attempting to survive” with the children. 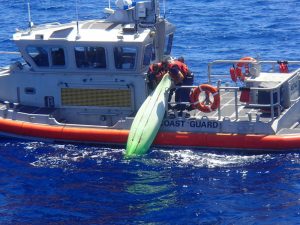 When the Kimberly family had not shown up at their family member’s house in Fort Myers by Tuesday morning, the Coast Guard was contacted. The search for the boat began Tuesday afternoon, and local authorities, including the Boca Grande Fire Department and the Lee County Sheriff’s Office, began searching Tuesday evening.

They were still searching when news came in from the Coast Guard Wednesday morning that a debris field had been located approximately 30 miles off the coast of Sanibel. The debris included two kayaks, water bottles that had been tied together, shoes, sports equipment and six life jackets.

Coast Guard authorities have not yet disclosed the identity of the body found this afternoon.

The Coast Guard asks mariners to keep a sharp lookout and contact Coast Guard Sector St. Petersburg at (727) 824-7506 with any information regarding the whereabouts of the missing family.

Newer PostEveryone should have the right to protect themselves
Older PostEnglewood man killed, two others injured in boating accident near Eldred’s Marina