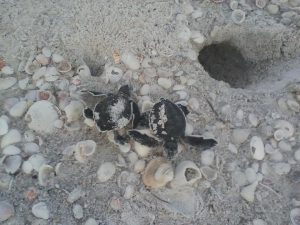 Two baby green sea turtle hatchlings were very lucky last week to have an alert patrol member find them after they fell into a crab hole late at night. Thankfully, patroller Jim Walter knew to look around for any stragglers and found them and directed them toward the sea.

Patrollers excavated three nests on Wednesday morning and found one hatchling in each one.

They were named Liberty, Bell and Freedom.

“Nesting has dropped off, and hatching continues to be in full swing,” said Boca Grande Sea Turtle Association Board member Mel Csank. “It’s very busy for the patrol members right now as we recently are getting near the end of the season.”

As of Friday, September 6, there were 617 nests documented by patrol volunteers (22 were green nests and the rest loggerhead), and 601 false crawls have been reported. A false crawl occurs when a turtle makes its way onto the beach but doesn’t produce a nest. Patrol members said they expected a high number of false crawls in June due to the beach renourishment project.

The hatchlings are about the size of a cookie, and if they survive land predators like bobcats and coyotes, they feed on small organisms living in seagrasses (called sargassum), where they spend their early developmental years.