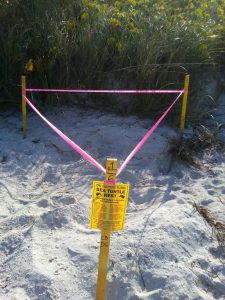 So far this season, there are far fewer sea turtle nests on Gasparilla Island when compared to last year. The Boca Grande Sea Turtle Association reported 281 Caretta caretta (loggerhead) turtle nests on the island. There were 352 on June 23, 2017. No Chelonia mydas (green) turtle nests have been discovered so far this year.

Some 259 false crawls were reported as of press time (when a turtle comes up onto the beach but does not lay a nest).

Complaints of strong respiratory irritation are still being reported around the island due to red tide, particularly at the north end, and the dedicated patrollers have been reporting large amounts of dead fish, including snook, goliath grouper and a manatee at the south of the island near the Pass.

Boca Grande Sea Turtle Association Board Member Mel Csank said during blooms like this, patrolling is at the discretion of the volunteers, so not very many patrollers are walking daily, especially those who have respiratory problems or feel it may affect them adversely.

“On Thursday morning (June 28) we found a live stranding of a juvenile turtle at Boca Grande Vacations, and we transferred it to the CROW facility in Sanibel,” Csank said. “We anticipated many more strandings, and thus far have had two reported turtle deaths: a green turtle found on the Causeway on June 27 and a dead loggerhead found on 40th Street. We have hatchings anticipated any day now, and I would not expect the hatchlings would do well in these conditions.”

Red tide increases the likelihood of strandings of both live and dead sea turtles.

If a turtle is rescued in time, it is possible for it to be rehabbed, but it takes quite a while for the toxins to leave their system – sometimes up to two months.

Signs that a sea turtle has been impacted by red tide include swimming in circles, muscle twitching, jerky body movements and/or lethargy.

If you come across a sea turtle that is stranded or dead, or if you see someone disturbing a nest or turtle, call the Florida Fish and Wildlife Conservation Commission (FWC) at (888) 404-FWCC.

The BGSTA is actively looking for volunteers. Training and supplies are provided. If you’re available a few mornings a week to assist, go to facebook.com/seaturtleawareness or send an email to bocagrandeseaturtles@gmail.com.