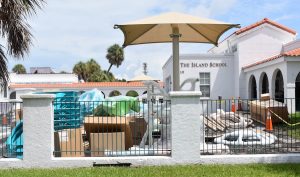 The Island School is back in session as of Monday, August 12. The 60 students at the school headed to class on Monday to meet the returning teachers and fellow classmates, as well as one new teacher at the school.

Stephanie Shirback started getting her classroom ready at the school several weeks ago.

Founded and approved by the Lee County School Board in 2000, the school is celebrating 20 years of enlightening young minds this year. It is rated an “A” school. The maximum amount of students who can attend the charter school is 60, and for the past several years, registration has usually been full before the prior school year was finished.

“We have a waiting list again, just like we’ve had for the past four years,” said Head of School Jean Thompson. “This week we concentrated on routines and procedures to get the students acclimated to the classrooms.”

Several PTO events are scheduled to take place throughout the school year, including a chowder dinner on February 29 and a potluck dinner Thursday, October 10.

“Donuts for dads” is scheduled for Wednesday, September 25.

The friendship dance will be held in the fall this year. Instead of happening around Valentine’s Day, it will be held on Friday, November 15.

The annual Bike Parade is planned for March 28, and the Mother’s Day Tea will be held on May 19 at the school.

The method of standardized testing will remain the same as it was last year.

“The English curriculum builds knowledge of key topics in history, science and literature through the study of excellent texts,” Thompson said.

The theme for the kindergarten class is “The Five Senses.”

First graders will learn about “A World of Books.”

Second graders will focus on “A Season of Change.”

Third graders will learn about “The Sea.”

The theme for fourth and fifth graders will be “A Great Heart.”

The new playground is expected to be completed by the end of August. The old one has been removed and the area is taped off and closed to the public.